43F - Hell Train: The Floor of Death (14): Grand De Jah rants and raves about the takedown of Hell Joe's reign on South City while Baam and Rachel wonder how they'd tackle the seemingly insurmountable task. As Grand De Lee informs them of Hell Joe's powers and abilities, the rest of Baam's team make their way through Hell Joe's castle to find Grand De Sah while Hell Joe himself forcefully disciplines Fabregas for insubordination. Elsewhere, with Karaka readying to forcefully glean the information he was looking for from Ha Yura, he is interrupted by the appearance of an unexpected visitor... 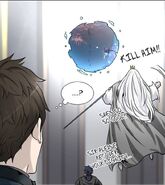 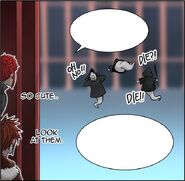 Every girl's hero coming to the rescue!
Add a photo to this gallery

Rather than a hero, a hip-hopper appeared.[1]

And so the cherry blossom requests continue! You may not have seen it, but Rachel behind the cherry tree was this week's request. 보경-nim sent in the request. I chose it because I wanted to put Rachel in a dress hehe.
Next week will be in the marked spot ^^ I hope for many fun requests.Yeouido is packed with people from the flowers these days. I like things quiet,
so I just want this season to pass by quickly haha...


This week had a lot happen, a lot that I don't want getting overshadowed by his appearance.
Oh what were we talking about? Urek looks more like a perv after so long.

The Room of Souls is not quite done yet. Baam and Rachel's relationship (tn: not necessarily romantic),
D'za and Hockney's relationship... Hockney will have a big role at the end of the arc,
so it will be a story I'll have to resolve.

Urek's out for the first time in a while... Wonder how Karaka will get through this situation...
Karaka's a really strong character, why does he keep getting matched up with stronger characters;;;
I'll show you guys Karaka being strong later... I find myself saying that these days hehe.

This arc centres around other characters from Baam's Team, so many of you don't like it, I hear.
But Tower of God's start itself, instead of being focused on few key characters was meant to be more of a collection of stories about a boy journeying in a vast world.
So all I can say is that season 1 feel is not necessarily the "original" feel, but this more expanded
view is closer to the "original". The concept of a strong main character and his friends clearing enemies is fun, but watching a small main character and his friends looking upon godly enemies is the Tower of God feel. Fun, isn't it? Kekeke. Whether I can handle it is another question keke.

Regardless, the end of this arc and the next arc will be centred around Baam,
so they'll get plenty of screen time. Don't be too disappointed ^^

Regardless, I always should work harder, missing so much. I've been regretting a lot, making effort constantly.
But I'm doing weekly releases so low on time... I wish you guys would know that ^^

This week's afterwords got long, but I hope that all of you stay strong, that I stay strong,
and that we can be all happy. Have fun outdoors of spring, be careful of the dust in the air! Have a good week,
I'll see you in the next one!

Retrieved from "https://towerofgod.fandom.com/wiki/Vol.2_Ch.245:_43F_-_Hell_Train:_The_Floor_of_Death_(14)?oldid=126921"
Community content is available under CC-BY-SA unless otherwise noted.