43F - Hell Train: The Floor of Death (12): Garam Zahard talks with someone about the Twenty-Fifth Baam via pocket and that person informs her that Ha Yuri Zahard has activated two 13 Month Series at once. After watching Yuri's ignition Hell Joe wonders if she is the person that Karaka mentioned. Yuri attacks one of the commanders, Walcott, with the Black March and Green April even when Evan Edrok is there, which leads Evan to activate Frog Fisher's Appetite to protect himself. Evan's right arm is injured and Walcott's body is half blown-up by that attack. Another commander, Sanchez, attacks Yuri but ends up losing one arm. In the second attempt of attacking Yuri, Walcott dies after Yuri stabs him with Black March.

Meanwhile, Baam, David Hockney, and Yuliu Mata arrive at the door of Grand De Jah's castle. Hockney shares his story with Baam on the way. 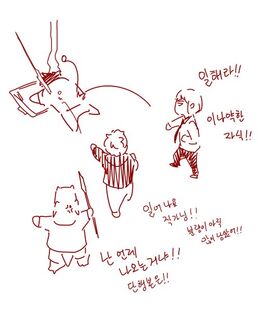 Because of various reasons, no request this week, quick doodle of what's going on.
(RaKoonBaam pelting SIU, over his tablet, passed out) with balls. A few weeks ago, an important file got wiped from a certain chapter...
And due to translation issues I need that file until next week,
so I had to work on previews, restore that... it was tiring ㅠㅠ.
So the cherry blossoms will have to wait. I gotta write this afterword fast so
I can quickly sketch the next one. The request box remains open, just in case. ^^If you've been keeping up with the afterwords, you'd know this, but whenever I'm not feeling good,
I get dizzy and feel like throwing up at times - which is the most unusual...
It's a mental thing so I can't get it treated, so I only do work,
and avoid doing anything involving computers or phones. It's gotten worse, so I'm stressing out.
Of course, I'm still working, just that it's so much that's the problem hehe.

Well, this has become another episode of "SIU Complains", but I should talk about this chapter.
So Yuri unwisely took the 1+1 deal... tsk tsk tsk ㅠㅠ. Yuri almost feels like a different person now...
Perhaps it's got something to do with the 13 Months and the souls within... But more on that....
next time! Well, I hope Yuri comes back soon to her senses, but she's not that different from normal Yuri.
Like how she's violent... and how she's violent... (t/n: intentional repetition of violent)
The 13 Months will get more info down the line.

And on Hockney.
I can't see the future, but I too wonder if it's a good thing to be able to see the future.
I guess I can make cash off of stocks keke. But beside the problem of past or future,
I wanted to say that it's better to look at the world as is for happiness.

By the way, David Hockeny, the artist I named our Hockney after, he often took a picture
of the same model during different times or places, and edited them into a unified work of art.
I felt a connection with what I dealt with here, so I named Hockney after him. Hockney has a lot of pins in his hair because a lot of my friends in art school did that... hehe.

We're finally at the Room of Spirit and Time. Who is D'za? Where is the second piece of the Thorn? Find out next time on Tower of God! ... and I'll get back to work. ㅠㅠ Have a good week!!

Retrieved from "https://towerofgod.fandom.com/wiki/Vol.2_Ch.243:_43F_-_Hell_Train:_The_Floor_of_Death_(12)?oldid=151283"
Community content is available under CC-BY-SA unless otherwise noted.