43F - Hell Train: The Floor of Death (11): Yuri confronts one of Hell Joe's commanders at the castle's gate. During this confrontation, Yuri calls forth Black March and Green April in hopes of igniting them and receiving their help in the battle. Green April gives Yuri a warning that igniting both of them at the same time is too dangerous for her, but Yuri insists. Ultimately, Black March tells Green April that Yuri is too stubborn to listen and says it could be a good lesson. The two weapons then proceed to ignite.

Meanwhile, Garam Zahard leads Baam to the castle of Grand De Jah, and gives him Arlen's Pocket as a parting gift.

Walcott intending to use full power 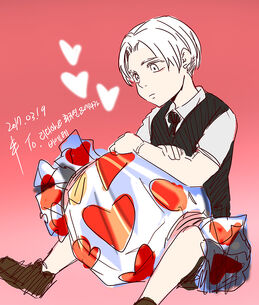 This week's fan request is from 리디아, 최규연, 에리카-nim. Candy and Vicente. Been a while since I've drawn Vicente hehe. I get a lot of requests for Vicente so I wanted to draw him some time, and since it (passed) White Day, so here it is. A lot of people requested White the Slayer for White Day, but that'd be too predictable keke.
Celebrating spring, next week's request will be cherry blossoms with a character of your choice ^^ It will be unique in that it will be a large space with requested characters filling it consecutively, so all you need is character, what they're wearing, or what they're doing.
This chapter is the pass between Garam/Baam's conversation and the next part of the arc, like a stepping stone. After this long convo, Baam's actual journey through the Floor of Death begins. This is beginning of the second part of the arc.


Yuri's fallen into the 1+1 deal. Wonder what will come off of that.
Yuri may look like an older sister figure with lots of authority, but in the beginning she was a naughty troublemaker daring/stupid enough to go down to the lowest Floor, so... ^^; I am glad that we got to see Yuri's real personality for the first time in a while. Yuri is a character that is almost a main character in that she is a big point in which the Tower of God story revolves around, so her enjoying her adventures is fun as a writing, progressing the story along.
Baam is more predictable than Yuri in terms of personality. You know how Baam will behave, at times stubborn and classical? That's Baam's personality.
I was wondering whether to cut this chapter at Yuri or to finish off with Baam's story, but to connect it more to Baam's story, I put Baam heading out in the end. Not sure if that was a good idea ^^; because I do feel like more could have been done. I hope you enjoy it.
Personally, recently my condition has been up and down, so that was difficult to deal with. Time like these, if the conditions around don't support you, it's hard to make good works, so I think. Not everything can always go well. As a person living their lives, they will inevitably face hardships constantly. But you have to work hard at it ^^ It's an author's job to fight it off.
Well, I hope you are excited for next week. It's a bit cold still so dress warmly, stay healthy, and see you next week!

Retrieved from "https://towerofgod.fandom.com/wiki/Vol.2_Ch.242:_43F_-_Hell_Train:_The_Floor_of_Death_(11)?oldid=151184"
Community content is available under CC-BY-SA unless otherwise noted.