43F - Hell Train: The Floor of Death (9): Garam informs Baam about the history of Zahard and the hidden Irregulars as well as Arlen Grace's baby. Meanwhile, Wangnan calls Rachel out on her behaviour while Karaka informs Hoaqin about a new way to retain his power. In his fortress, Hell Joe asks his commanders on what to do regarding Karaka's statement. Elsewhere, Yuri's group finally reaches Gallstone Village with Hwa Ryun making her reappearance.

Baam inquiring about his past 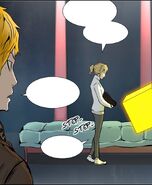 Hoaqin and Karaka plotting together 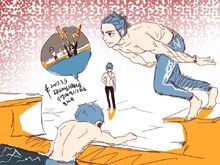 This week's request is from 리디아-nim: The Koons at a swim meet. Or more of a life-threatening dive...? Why did I choose swimming? It's said to be pretty good for anatomy studies... it is said;;;
Actually, I took a swim class during college for a year, and a sports major that was in the class looked so cool when he did butterflies. I can't do that. I can barely freestyle, and I'm out of practice;;
I was surprised at the amount of volleyball, and I like volleyball, with their speed and power.
Until I started making Tower of God, I used to love going to watch games, but ever since I started... ㅠ I love watching baseball and basketball live too. I'm terrible at sports, but I loved watching;;;

Next week's theme is 'Occupation': Pick a character and a job/career they may have ^^

This episode... hm...
A story that's from very very long time ago ^^;;
I actually had a lot of thought over this, since I'm telling stories deep in the lore.
Since I can't make flashbacks involving characters whose faces haven't been revealed yet I had to make Garam give an exposition, so a lot of the artistic direction was limited, yes.
It's mainly text, but I hoped it still was interesting... that's what I was thinking.

I considered cutting the exposition as short as possible, but since so much has been spread around as "official lore" I thought explaining it in the main work would cut a lot of the nonconstructive theories, or predictions that only confuse readers.
Since this is a webtoon, I get a lot of comments predicting what is to come, and from the previously-revealed lore so many esoteric theories were made at times so it broke immersion for some people actually I heard ^^;;
So I thought to cut some of that kind of theories at the cost of increasing the text amount. So instead of being a story, it feels like I'm narrating a book, but considering the genre, which is a longer piece of fantasy, it's something we had to take care of.
It's a genre speciality in other words. Isn't it fun? Hehe?

So this chapter an important tale has taken it by the storm.
Since it's only text based, when the main actors show up later the past can be spoken of in more realistic looking terms.
I really want to serialize the journey of Zahard and the 10 Family Heads sometime in one format or another. ((T/N: ToG sequel NOT confirmed))

Anyway, with Tower of God-certified OP Enryu entering the narrative ring in the end so it should be a exotic red crab party next week... or so one hopes hehe.
Pohang has the best red crabs. (What kind of a train of thought is this.)
(T/N: Pohang is a city in south-east Korea, north of Busan)

Hell Joe, who got buried in the exposition will get more kick to his own story next week ^^

Well, weather's warming up, but still be on the look out, cold's about, stay healthy this week, and see you in the next one!

Retrieved from "https://towerofgod.fandom.com/wiki/Vol.2_Ch.240:_43F_-_Hell_Train:_The_Floor_of_Death_(9)?oldid=125544"
Community content is available under CC-BY-SA unless otherwise noted.