43F - Hell Train: The Floor of Death (8): Garam Zahard chooses to share some of her knowledge on who Baam really is. Meantime, Karaka takes Ha Yura and Ja Wangnan into a secret route of the Floor of Death. Later on, the unnamed Red Witch request Yuri to get rid of Hell Joe, the current ruler of South City.

As Karaka meets with Hell Joe at the Red Fortress, Joe emphasises to not support the Slayer of FUG since he did not hold back his end of the agreement. Karaka ensures to keep his part since an intruder currently on the Floor of Death is capable of ensuring Hell Joe's wishes.

Garam tells the story of the creation of the Zahard's Princesses, her encounter with the trapped princess Eurasia Enne Zahard, as well of the existence of Arlen Grace who was Zahard's first love. 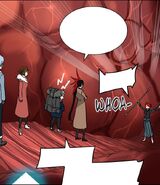 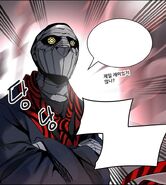 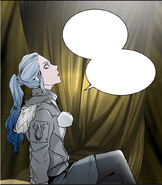 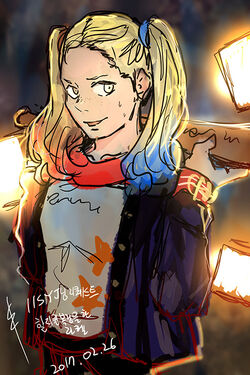 This week's request, Harley Quinn Rachel, is from 11syj-nim.
A lot of you requested Harley Quinn, but I couldn't do it with a male char ;; I was asked for no freckles,
but Rachel without freckles isn't Rachel, so hehe, I added them.
Rachel is one of the rare characters in Tower of God who reflects on who she murdered and
tries to justify them. A lot of you are against that, some of you pity her character,
and I myself see Rachel not as a villain, but the opposite of Baam.
She's a character I care about a lot to, despite her getting hate ^^;
I have lots to say on Rachel, but I'll say bit by bit as the time goes.
Next week's theme is sports. Pick a sport and a character!This chapter
We continued our story of Joe, and we are starting to get Baam's story.
Hell Joe is actually a name I based on a meme, I'll let you guys know which one it is later
(T/N: I'm guessing Hell Joseon, because Korea's harsh social/economic climate)...
He'll be more in the spotlight when Baam's part ends, but Hell Joe is a different villain from the ones past.
He's quite unique, and although I had told myself that the Floor of Death had to be serious,
but Hell Jo had other ideas when he was made ^^; He's fun, but still weighty. That's the idea.


On Baam's segment...
Who Arlene Grace is... wait till next week if you're curious ^^; Probably starting now,
we're going to get a few important stories hehe.


Oh, I'm looking for a new assistant. The current assistants are having a lot of complications,
and Tower of God has a lot of workload right now ㅠㅠ
I alone can't handle all this work at this rate. If you are interested,
http://blog.naver.com/PostView.nhn?blogId=inutero3334&logNo=220945046433&redirect=Dlog
Look in the link above for details ^^ (TN: He pays 130만원/month, which is $1150/month.
Looking for people in Seoul or Choongchung area ideally,
will need to go through 3 months of learning the ropes. Offers the major insurances. 3D modelers preferred.)


Well, have a good week, and see you next in the next one.

Retrieved from "https://towerofgod.fandom.com/wiki/Vol.2_Ch.239:_43F_-_Hell_Train:_The_Floor_of_Death_(8)?oldid=107908"
Community content is available under CC-BY-SA unless otherwise noted.