43F - Hell Train: The Floor of Death (4): Hong Danhwa thanks Yuje for saving him, but the latter replies that he should thank Yihwa since it was her flame of the Yeon Family that kept them safe long enough for Yuje to intervene. Danhwa then asks about Rak's whereabouts, but Urek replies that Yuje only saved the two of them. Danhwa exclaims incredulously, but they confirm that they saw no-one else. Hearing that Baam's team had gone to the Floor of Death, Urek excitedly notes they'd better go there too.

With a gargantuan host looming over Hockney, a familiar voice calls out to him. Recognising that it belonged to Mata, the latter pokes his head out of the host's mouth and greets Hockney. Travelling in the host, Mata and Hockney chatter before the former asks about Baam. Explaining who Baam was and why they were together, Hockney then reveals that he was planning to head to South City to retrieve the last piece of the painting that held his soul. At that, their host was attacked by a gatekeeper.

Elsewhere, Koon's group also encounter a gatekeeper. Yuri and Evan decide to let the Regulars fight it. Jumping straight in, Androssi quickly floors the gatekeeper with her new technique. Suddenly a yellow orb bursts from inside the host's body and menacingly assaults Androssi. Tagging herself out, Koon gets ready to take it on with his new skill. Meanwhile, a mysterious creature notes the number of them present before relaying to call Leech Falawan. 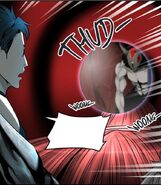 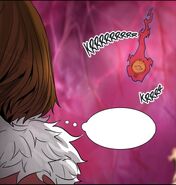 This is the afterwords for season 2 chapter 235.


This request from 규린-nim is Yuri and Androssi comparing their hanboks.
Previous festive requests were mostly male ^^;
So I decided to go with a girl this time, haha.
I wasn't able to complete it due to time, but if people want it, I'll finish it up and put it in the danhaengbon(tankobon).


Next week's theme will be 'rivals'
Give me a request of a pair of characters who you think are rivals! ^^.


Since it's only the early part of the Floor of Death, not a lot is shown yet.
Some strange eye-monster thing?
Something of that sort has appeared, wonder what it will be hehe.
Hockney met someone he knew right away like the native he is.
I myself went down home for the holidays and there were barely found anyone I knew,
so that was a shocker...


Next week we'll look at Koon's new technique.
Since Koon as a Light Bearer hasn't been in the spotlight in a while and lots of you wanted to see specialisation of the class, so I tried to make a useful Lighthouse technique haha.
I hope you are excited.


Since this is a job that knows no holidays I still work but I did get to see my parents a bit in person and called up my friends for the first time in a while.
Moments like these are when I feel like I wake up from a dream and wake up in the real world hehe.
Things like this make a manhwaga/mangaka a hard job, but it may also be a plus.


Well, now that the new year is in full swing I resolved to work harder on various fronts.
I'm always lacking, but I hope you guys can look over that.


Well, I hope you enjoy the next week's chapter,
may 2017 be filled with blessings for you, and stay happy ^^


I hope you guys enjoy Tower of God this year as well.

Retrieved from "https://towerofgod.fandom.com/wiki/Vol.2_Ch.235:_43F_-_Hell_Train:_The_Floor_of_Death_(4)?oldid=107863"
Community content is available under CC-BY-SA unless otherwise noted.