40F - Hell Train: Wangnan (5): This is the two hundred and thirtieth chapter of Volume 2 of Tower of God.

The best D-rank Scout gets on board the train, against Sachi's expectations while in the Rice Pot, the "god" of guardians tells Baam he needs to control Shinsu differently in order to learn.

Elsewhere, Yura informs Hoaqin on how she has the best D-rank Scout in the palm of her hand and Wangnan gives Rachel an answer to her offer. 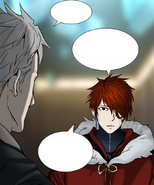 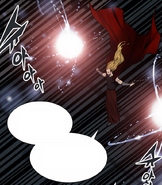 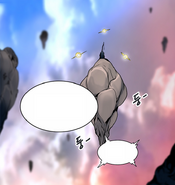 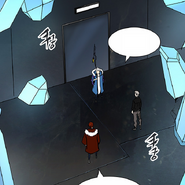 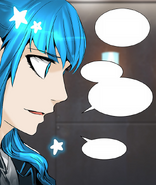 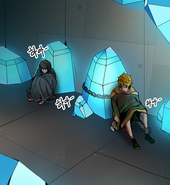 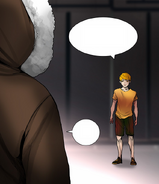 It seems difficult to find someone to spend the rest of your life with.
I hope you all have a happy new year, together with some good people. ^^[1]


Late, but to those who are looking for the Christmas spirit! ^^
The most requested thing was Yuri + Baam (T/n: WOO TEAM YURI) and I added a Yihwa, who is
surprised after catching the tree on fire.


Next week I'll do a character + a Tower of God Character ^^
Send me your requests below, thank you!


Last chapter I tried to write a short afterword,
but I accidentally uploaded some files twice ㅠㅠ.
Once again, I'm sorry.


Since we didn't talk about the new character last time,
here's a new character. His name is Hockney.
His name is from David Hockney, a British artist. There's not meaning to the name,
just that his art is divided, so that reminded me of David Hockney
(I had an art book of his works right by coincidentally ^^;)
He's from the Floor of Death, and he will be a key player on the Floor of Death.
He's a Scout, good with his Observer.


And ultimately Wangnan took Rachel's deal.
Wangnan and Rachel's link was something I've been planning on.
I held it off considerably until the Hell Train where they finally created a link of sorts.
And since this is a very very important moment in the Tower of God overall storyline.
So I had to consider what timing it would happen ^^;


Many of you asked why Zahard would need the key to the next Floor when he's at the top;
by that, I mean the top of the parts that Zahard climbed to.
The fact that there's more beyond is well known, and the ultimate goal of the High Rankers is to climb the Floor(s) that Zahard has not conquered.
There will be more on that later. ^^


Baam is training hard.
The new technique is named Shinwonryu, which will be dealt with heavily going forward.
(T/N: My guess on the meaning of Shinwonryu is Godly Circular Flow, but could be wrong.)


Khun learned something new too, 쿤도 새로운 기술을 익힌 것 같은데요. wonder what it is.
새로운 등대 기술은 무엇일지.. Khun too will go through a lot of transformation in his power in combat.
Khun's feelings or word on Baam may have something to Khun's past.
More details when we get to the Khun Family arc.


I thought I'm better, but I'm still not top shape. My body doesn't keep warmth outside...
Yeah... Since I'm alone in Seoul, my body's been taking a toll;;
Don't get sick and take care of yourselves ^^
Happy and joyful end of the year: I hope you spend with your loved ones.
Have a good week, and I'll see you in the next one!
Thank you!^^