20F - Epilogue: This is the twenty-second chapter of Volume 2 of Tower of God. It follows the resolution to The Trustworthy Room test, as Wangnan's team celebrate, Augusgus is revealed as a FUG member, and Khun is talking about the new slayer candidate.

The test ends with Wangnan explaning that he tricked Viole by swapping their connectors in the bath house. He later tries to get into Nia's room, but the door remains shut...

The team celebrates victory in Yeon's room, much to her chagrin. Goseng and Miseng praise Wangnan for his courage to Viole, but Akraptor sits in silence.

At night, Wangnan is standing by the porch when Viole suddenly appears out of the darkness. Wangnan immediately apologizes for tricking him into a team, though Viole responds by asking why he forgave Lurker. He replies, saying that he forgave him in order to forgive himself. Viole then asks what he hopes to change in the Tower, to which Wangnan answers by saying, "I want to make a place where we can all smile and live together under one roof".

Meanwhile, Love is in Augusgus's room, apologizing for his misconduct by administering an improper test. The director states how although he was trying to exact revenge, Love only managed to stir up rumours of a new incredible Slayer candidate. Love is suspended for 10 days in the end.

Immediately after Love leaves the office, Augusgus closes the curtains and communicates with the Submerged Fish, saying that everything is going the way FUG wants it to.

Love meets with the passing Regulars and apologizes for the test they took while congratulating them on their ascension to the next floor.

The scene changes to a cafe where a conversation about the new Slayer candidate takes place between A.A. and another person. A.A. is revealed to be Khun. 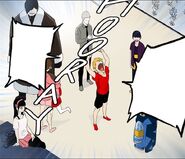 See you after a week of rest for the next chapter. ^^

The resting period is one week.
My comment wasn't properly posted,
but since I sent the person in charge a text, it'll be changed soon.

And my least favourite character came out.
It's difficult to draw him and the plot gets complicated whenever he's in it.
Ao (frustration), I hate you.
Well, [Khun], if some kind of merchandise comes out,
I think you'll sell out the most, so I love you.

'Gusgus being a FUG member has been decided from the beginning.
Mm... it was actually planned to be foreshadowed when Love reports in,
thinking that [Viole] is a girl is a girl but 'Gusgus refers to him as a guy in his reply;
however, I thought that would have made it too obvious so I decreased the foreshadowing.
In fact, I'm tired of dragging out time using foreshadowing so..;

Well... in a case such as this test,
Wangnan Team formed + FUG conspiracy is the core content.

I'll take a week break, and the plot will begin to really connect with Part 1 starting from next chapter.
I think the plot will flow towards a direction none of you have expected, haha.

The reason for this hiatus being [only] one week is because after this arc and the next arc,
there is a pretty long arc, so I plan to take another break before then. ^^

Then everyone, see you after two weeks~!

P.S.
I was thinking of writing this but it seems I actually didn't do it.
The reason Yeon could join Wangnan's team is because Prince and Yeon were originally one team.
They formed a team after Viole left, and if you play close attention,
Prince says that they are "on the same team" when he hands over the soft drink to her.
That is also the reason why Yeon could leave her room. ^^

To be more concise, in a situation where Yeon-Prince-Rapdevil formed one team,
after Horyang eliminated Rapdevil and got Yeon-Prince to join his side,
Tin's room was stolen using Wangnan's connector, so they won the test.
In this chapter's case, I reduced the explanation of the game to the absolute minimum and put all my focus into emphasizing the feelings of the characters,
so you have to read into the details to discover what is being foreshadowed by the game. ^^

Retrieved from "https://towerofgod.fandom.com/wiki/Vol.2_Ch.22:_20F_%E2%80%93_Epilogue?oldid=136701"
Community content is available under CC-BY-SA unless otherwise noted.