39F - Hell Train: Wangnan (3): Baam comes to terms with his apparent lack of power and resolves to get an invincible power in order to protect those close to him.

Finding himself in darkness, Wangnan suddenly sees Akraptor and Prince who then proceed to walk away from him. Wondering why, Nya Nia then appears and berates him for being a cowardly liar who only ever got the people around him killed. Nia then tells the Prince of the Red Light District to wake up, with Wangnan then rousing from slumber and realising it was all a dream and Akraptor and Prince were indeed dead. Suddenly, Wangnan hears voices calling out to him and he begins screaming in panic.

Outside, Hoaqin tells him to keep it down before chastising him for crying over dead allies. As Hoaqin walks off and wonders about Wangnan's tenacity, Cassano appears and frustratedly asks him why he wasn't informed of the planned trap. Hoaqin tells him to stop complaining before revealing his disappointment in Cassano's capabilities. Cassano reacts in ire but Hoaqin then tells him that he was weak due to his emotions and, to prevent being discarded by FUG, he needed to get rid of them. Meanwhile, Yura asks Rachel why they needed to keep two hostages but the latter explains her reasons. Rachel raises a greater concern about Hoaqin, but Yura assures her that the greatest D-rank Scout would be getting on the train and would be dependable. After asking whether Rachel had properly searched the hostages, Yura leaves to let Rachel get some rest. With Yura gone, Rachel tries to calm her trembling down noting that she would have to get used to killing people. Taking a breath, Rachel then ponders on Wangnan's identity and why he was in possession of a ring with Zahard's symbol on it.

Koon brings food to Baam's room to see him gone. Elsewhere on the train, Baam returns to the Rice Pot and asks the god of guardians to teach him how to become a god. 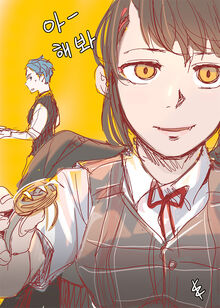 This is the afterwords for chapter 228.
The request for the week was Androssi eating pasta.
Even a lot of you overseas requested it.
Coincidentally I had pasta today.


Hm... a lot about Wangnan this chapter.
If Baam and Rachel has a lot of secrets what's outside the Tower,
Wangnan has a lot of stories about inside the Tower.
He called himself a prince quite often ^^ ;;
"Prince of the Red Lantern Street": A lot of you are making various theories about that, but
I'll just say that the story needs more revealed before anyone can reasonably predict the story.


Wangnan is actually very old
(enough to be brothers with Karaka).
I said he got held back a "few" years early on ^^;;[1]
but he didn't sacrifice anyone intentionally.
It's just that he (T/N: Subconsciously?) used selective memory to hide his own pain to guard
himself from tragedy, protecting his sanity.
(Think of how Yihwa's attack killed all the Regulars except himself).
Ja Wangnan as a character has a personality that draws others in, which he likes, but he is also sensitive to deaths and pain that those around him suffer.
I thought someone like him climbing the Tower without dying somehow would be interesting.
Regardless, we'll see a lot more about Wangnan in the future.


And Baam's made a decision.
He doesn't want to be an omniscient and omnipotent god,
but to fulfil a desire to transcend something.


If I become a god, I want to make a Hyperbolic Time Chamber.
And set it so a day in there is a week out there...
Imagine uploading 7 weeks worth of content in a day ^^;;

Well, Baam's story next week and Wangnan's misadventures.
I hope you guys are excited.
I always try to do my best, but I sometimes see mistakes, so I think to myself to do better.


Well, stay warm in the cold winter.
And have another happy and peaceful week ^^

Retrieved from "https://towerofgod.fandom.com/wiki/Vol.2_Ch.228:_39F_-_Hell_Train:_Wangnan_(3)?oldid=126904"
Community content is available under CC-BY-SA unless otherwise noted.