39F - Hell Train: Wangnan (2): After Wangnan catches Cassano, Rachel and Ha Yura make their move to ambush Team Tangsooyook. Rachel reveals that a sacrifice must be made to reach the 43rd Floor and wonders who it shall be. Both Akraptor and Prince make a crucial decision. 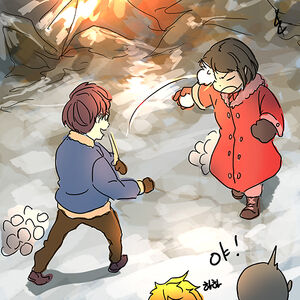 Personally it's hard when I have to draw a character die.
I don't enjoy it.
I guess since the story bases itself on cold-blooded competition
it can't be avoided, I suppose.
I as an author don't enjoy drawing those scenes or drawing them out.
So when I draw these chapters, I try to be in as much pain as the characters.
It's a respect I have to the characters and those who loved them.
I don't want myself getting numb to it.
Being unable to draw Prince or Raptor is sad.
Raptor's ring may show up later.

Rachel and Wangnan's entanglement starts now.
How Akraptor and Prince's deaths affect the two's relationship will come up as the time goes on.
Since Wangnan has a separate storyline from Baam and Rachel,
their story will be interesting...
And Baam, who lost an ally on a "Journey of Self-Discovery",
pay attention to how he grows.
After this chapter the story will be the rungs of the ladder to the Floor of Death.
How each character deals with pain, I'd like to show...
And fairly important exposition is about to happen, so I hope you guys enjoy it.

I was outside when first snow fell this year, luckily.
I hope this winter won't be too cold, with the occasional soft snow to make people's days.
This winter is one of chaos, but with combined hearts perhaps we can overcome?

Well, have a good week
and see you in the next one.
Thank you ^^
[1]
ps.
For non-korean
Please send your request(latter picture) to Twitter

Retrieved from "https://towerofgod.fandom.com/wiki/Vol.2_Ch.227:_39F_-_Hell_Train:_Wangnan_(2)?oldid=126903"
Community content is available under CC-BY-SA unless otherwise noted.