39F - Hell Train: The 'Name Hunt' Station (26): Noting that Yuri should be more concerned with her own life, Karaka launches a massive attack, but Evan absorbs it with his special item. Then revealing another power of the item, Evan begins restoring the broken bridge, impressing Karaka, with both Evan and Yuri knocking Karaka on his plan to hinder Baam. Karaka gives a confident reply before he and Yuri begin fighting.

Meanwhile, in the no-named residence, the Regulars see what's occurring outside and Khun realises that with the bridge being broken, they would have to use Androssi's Bong Bong to get across. Telling everyone that it would be dangerous to get across, Khun states that injured people should stay behind.

Reaching the bridge, Khun wonders why the Floor Guardian wasn't getting involved despite the Ranker battle below. From above, whilst restoring the bridge, Evan wonders why the Regulars are trying to cross the damaged bridge whilst Yuri and Karaka both fighting below. Khun details how they'd get across using Bong Bong and makes it clear that it would be about everyone's individual abilities whether they'd get on the train in time. Suggesting that certain members stay behind due to their condition, Yihwa pipes up and says she would be going regardless of her condition because she owed it to her team. 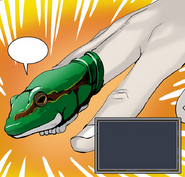 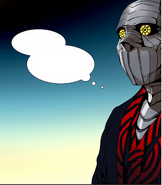 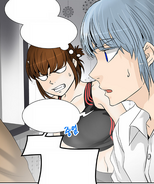 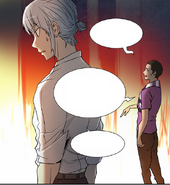 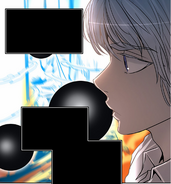 This is the afterwords for Chapter 223.


This week's request is Kaito Khun...
I wasn't actually quite sure who Kaito was until this week
But I did my research and figured it out ^^;;
There was actually a lot of requests for Khun as Harley Quinn,
but I couldn't see that happening, so went with a "caper" of sorts.
For next week's request I'll make a CSAT- encouragement using the char that is most requested!


A disaster is happening in front of Baam's party ;;


I've increased the scale on Yuri/Karaka's battle compared to battles of Rankers in the past.
So to Baam's party, this is more of a natural disaster than a fight. ^^;;
Or that was what I was going for.


Since Evan's a Guide, the amount he will contribute to the fight will be rather small.
It's not that he's weak in battle, but it's his type to be like so.
Yuri enjoys fighting alone as well.
Evan's restoration ability has a limit of how far back it can restore,
so a bridge broken so long ago cannot be fixed.


How this situation will be viewed by Rankers and Regulars will differ.
To cross or not to cross. Here Yihwa chose to cross as well.
I would hate to part with a team I was with for so long.


Next week the Yuri vs Karaka fight shall continue...
And Baam crew's plight will only continue.
Please stay on the lookout for that.


The Previews... Hm... next week... may be rather critical...
The weather was so cold recently it felt like middle of winter,
but it's rather warmer today ^^;;
Everyone dress warmly, watch out for your health.


If you're prepping for CSAT, everyone please do your best.
Everyone stay strong and have a good week.
Thank you!
Stay happy! ^^