39F - Hell Train: The 'Name Hunt' Station (25): Via her Pocket, Maschenny explains the nature of the bet to Yuri and gives her the ultimatum that if she refuses, she would make sure Yuri could no longer be on the Hell Express. Confused by how noticeably suspicious the situation seemed to be, Karaka suddenly reveals himself to Yuri and Evan, making it clear that he is going to take revenge on Yuri for killing Pedro.

In the no-named residence of the Name Hunt station, Leesoo and Koon discuss what might happen to the station after they had left. Baam then asks Koon if the station would be able to change and the latter replies it probably could but adds that they shouldn't try to change things as they weren't gods. Baam then prepares to ask Koon if something was up, but Androssi dramatically barges in and asks to go with Baam to the 43rd Floor as a she wanted to meet a certain Princess who was rumoured to live there.[1] Baam and Koon deliberate over the decision, much to Androssi's chagrin when suddenly they all hear a loud noise in the direction of the train.

Meanwhile, Yuri calls out Karaka's wayward attack as they would prevent Baam from reaching the train. Karaka disregards her comments, confidently stating that he plans on stopping Baam anyway and Yuri should be more concerned of her own life before anyone else's... 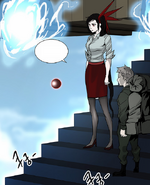 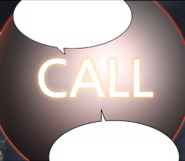 which also includes a threat

The group at the No Named residence

Laure did not get his beauty sleep

And plans to tag along with

Karaka destroys the bridge that leads to the Hell Train

Since I had a lot of Halloween-related requests I went for a simple Halloween feel.
I wanted it to be high quality, but weekend was busy so I couldn't do much.
I wish I could finish it ㅠ


Next week I'll take a costume request:
just name a character and the costume you want
(T/N: that means you guys too! Write your request in the relevant Reddit post; cf reference.)


We're wrapping up the Name Hunt station & starting a new one.
It's hard to say whether the Name Hunt station will change,
but wherever it is, the people in power find it hard to put it down.
Actually, when someone puts down their power, someone becomes the new power, which is also ironic.


In Baam and Koon's conversation,
you can see a bit change in Baam's thoughts.
From Rachel to friends to the Station, Baam wants to save more and more people.
Perhaps Baam himself without realising it is becoming something/someone
who everyone wants him to be.


In the end, it seems it's Karaka vs Yuri...
The results will be... ^^;
And Karaka's even caring for your life in the midst of it.
I really hate drawing your helmet.


The previews are... spoilery... hehe


The nation and our society is chaotic and the weather is cold.
Don't lose hope, stay strong, stand firm and brave,
and with hope I wish that you'll face this winter.


Look forward to next week guys!
Thank you!
Have a good week ^^