39F - Hell Train: The 'Name Hunt' Station (24): Lo Po Bia Elaine steps out into the auction and displays her skills for everyone watching, putting on an impressive show for everyone present. Up in the stands, the buyers note her talent and get ready to bid but a Ranker from the Lo Po Bia Family tells everyone not to bid for her as she was part of the Lo Po Bia Family. However, Ha Ruda dismisses the request and says he will bid what he wants. Jinsung then pipes up and challenges the two Rankers to bid for Elaine, with the highest bidder buying her outright. On the count of three, the three Rankers say their bids with Jinsung shocking the other two with his massive bid of 10 billion points. With the transaction settled, Jinsung leaves.

Later, Yuri is informed by Ruda of Kaiser being bought by someone else, her loss to Androssi Zahard and FUG's Slayer candidate not appearing at the auction, much to her confusion. Just then, Yuri gets a message from Maschenny Zahard to call her. Answering the call, Maschenny challenges Yuri to a bet, wagering her Yellow May for Yuri's Green April.

Meanwhile, on the Hell Train, Karaka discovers Pedro's corpse and connects to his memories, enabling Karaka to discover what had occurred on the train prior to arriving, in particular, that Yuri Zahard was on the train... 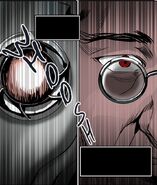 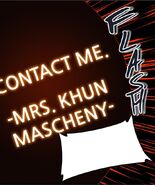 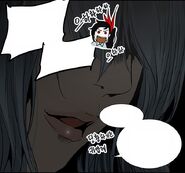 For this week's request, I drew a "casual" Yuri + tagalong Evan.
I take requests every week,
although I skip out when my condition's not well ㅠㅠ.


Talking about the webtoon, we finally arrived at the festival.
From the beginning, I wanted to put Kaiser's monologue along the festival,
akin to an epilogue.
At first, I wanted to go with naming it "The Auction" but it felt too literal,
so I changed it to a festival ^^;


Kaiser, instead of repenting for her mistakes focuses on untangling
(T/N: can mean "solving") the relationship between her parents and herself.
Her perspective is above most peoples'.
But I don't want her to be a character who suddenly and forcibly regrets or repents her wrongdoing,
that's just what kinda character the Kaiser was in the first place.


I considered that as Ha Jinsung spoke of the Kaiser as saying she was "saved by a god".
Kaiser was definitely a villain, and that kind of a Regular isn't worth saving through spending 10,000,000,000s.
But since their god chose the saved, that kind of question was unneeded.
I think this shows how well FUG follows their Slayer, regardless of good or evil.
And perhaps Baam is becoming such an entity.
If Baam was perfect justice, would he have saved Kaiser?
I have a feeling that would be a no.


In the auctions, the base units are 10K Points (I requested a correction on that).
Since the Tower is so large each area has their own currency units but among the Regulars and the Rankers, it's Points.
Points are a very loosely defined concept for a currency but can be bought using official regional currencies.
Of course, they can be exchanged as well.


Of course, since each region has their own values for money, so the exchange rate changes,
but in most regions, having 100,000,000 Points would mean you're filthy rich.
Unless you're near the regions where the families are based in (Because currency worth differs)
but still, 100M Points is a huge amount of money in the Tower.
With that kinda money you can ditch the Tests, go into the Middle Tower,
and live out the rest of their days rich.


Of course, Ha Jinsung is extremely wealthy for giving that kinda cash for no particular reason.
By the way, Hwa Ryun's the one who actually asked.
He's kinda also paying for saving Hwa Ryun ^^;


And lastly...
Karaka's back.
In the whole story of Tower of God they are one of the main forces;
although one of the youngest Slayers,
they have a high potential, are quite active, and currently quite skilled.
They are like the rising star of evil ^^;;
In a way, they are in a similar position to Yuri.
(TN: Karaka's gender is unknown..? Curse you SIU for your unspecified genders!)


I don't like drawing them because of their helmet (...)


Regardless, I hope you guys are looking forward to next week, now with Karaka in the mix ㅎㅎ.


I've been feeling a cold since last week, still have a fever.
Everyone watch out for the cold,
keep yourself well and have a good week ^^.