39F - Hell Train: The 'Name Hunt' Station (22): Shilial Zahard calls Hatsu's bluff about his un-ignited weapon but before they can duke it out, Leesoo interrupts them and surprises the Princess when he reveals what he knows about her situation involving the warring Princesses on higher Floors and which faction the twins were siding with. However, despite Shilial praising Leesoo for his knowledge, she informs them that they were actually siding with another girl...

Meanwhile, Kaiser attempts to up the tempo of her attacks to no avail. Breaking through her offence, Viole overwhelmingly defeats the Kaiser whilst driving home the point that she had lost her sense of identity in her attempt to bring retribution to her family. 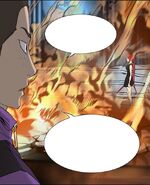 For this week's request..
in honour of the students who are studying for the CSAT, only 50 days away, I drew this.
To all of you students studying for tests, to all of you prepping for starting their careers,
to our troops, to those of you within society,
let's all stay strong.

The Kaiser is finally down. ㅠㅠ
When I went over this section in the preview section,
I thought if the Kaiser's battle went for three weeks, it shouldn't be that long,
but since the webtoon went on after the previews some said it felt slower.
Next time I'll try a more dynamic approach.

Before the Kaiser match, I had a lot to say...
If White(Hoaqin) from the last arc was a true pinnacle of evil,
Kaiser is someone who split from that point and fell, and is someone who's somewhere below..
She wanted to climb but one point,
she even lost herself and became part of the system.

When I started the Name Hunt Station I already had this chapter's plotline mostly drawn out.
So the fact that it's a Name Hunt Station,
the name of the Kaiser's mask all came down for this scene...
Although a lot of things happened in the middle. ^^;
When I do an episode like this, I feel a sense of accomplishment when I arrive at the ending I first imagined.
Reaching something always feels good.

I feel better now
but not by much... ^^:;
A fundamental solution will be difficult but I'm seeing doctors..
and I've been thinking that I need to take a break.
Health of body and mind are very important things.
But people always cheer me on,
so I think it's a blessed life.

Preview chapters..
As.. you can see..
kids grow up fighting..

Well, this is the end of the Name Hunt Station.
Next week has some important things coming up..
Well, I hope you are excited for next week ^^

And have a good week!