39F - Hell Train: The 'Name Hunt' Station (20): Kaiser explains one of Fenryl's abilities: to inflict a penetrating wound that will never heal. Viole seems to be cornered by both Kaiser's weapons and the spirit wolf. Inieta and Koon Ran make their final move, both ending mortally injured in the process, as Inieta reminisces the moment he became one of the bosses of the Name Hunt Station. 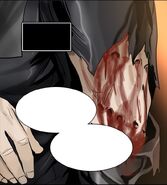 This time, in spirit of a request that fit this chapter's events,
I drew Inieta with hair untied.


The battle between Inieta and Ran is over.
I actually wanted to cover everything I could about the relationship between Inieta and Kaiser.
Due to the flow of the plot the 10 Bosses were skimmed over, which I wasn't too happy with.
And why Inieta logically would listen to Kaiser's orders ^^;
The Inieta vs Ran scene I wanted to give as much impact as the main battle
or at least that was the intent.
I hope it wasn't the details but the emotions that stay with you this chapter.


Inieta had talent but due to the way the Arie Family works he was forced to become an outsider.
Of course how much of it was his own and how much of it was the environment we can't say,
but it would have turned out better if he grew up knowing more love.


We're starting to get more information on the Arie Family in the main story.
Arie Swordsmanship is not just of Arie Family.
Normal people can learn the forms of the technique. They're good with swords for a reason.
It's just that they can't use it as a Arie member can;;


Well, the battle between Ran and Inieta is almost a tie.
Ran did win out in the end, but Inieta had no support.
Considering Inieta is a D-class Regular who started much earlier than Ran,
Ran's growth is scarily fast.


And the articles on my blog, since I haven't updated in so long...
There are a lot of settings that have changed in the main story
so I've turned it private for a time.
I am not sure when I'll get to them ㅠㅠ but I hope to fix it up and make it public again.


Next chapter will be back to the fight between Kaiser and Baam.
This chapter's reaching it's climax,
so I hope you guys enjoy it till it's end ^^


Everyone, please take care of yourselves, don't get a cold,
have a good week and I hope you look forward to next week!