39F - Hell Train: The 'Name Hunt' Station (17): Cornered, Alphine tries to take her own life to prevent the information from being leaked to the Slayer Candidate. However Jyu Viole Grace manages to steal Alphine's name, and forces her to reveal the path leading to the Gallery. Viole tells Alphine that if he could choose between saving Kaiser and destroying the station, he would choose the latter without any hesitation.

When Viole and Koon reach the escalator that leads to the Gallery, they encounter Ship Leesoo who is already waiting for by the escalator with a shinsoo bomb in hand. Shortly after they ask about the shinsoo bomb and his knowledge of the place, Leesoo casually destroys the escalator with the shinsoo bomb. Elsewhere, Shilial reveals to Hatsu that, while she has nothing personal against Androssi, she doesn't recognise Androssi as worthy of being a Princess because of her foolhardy actions. Meanwhile at the Gallery, Kaiser receives a notification from Alphine that Viole is heading to the escalator without realising that it's merely another trap meant to kill anyone who attempts to access the Gallery that way. When Kaiser already ponders who is left now that Viole has succumbed to the escalator trap, Viole and Koon crash into the Gallery with the only floating island that can be used to access the place, which causes a great shock to Kaiser. 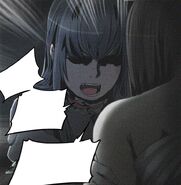 This is the afterwords for Chapter 214.
Got a lot of rule 63 requests,
but in the spirit of the chapter I took the request for Kaiser taking off her mask. ^^;;
Since it's a spoiler I can't reveal her face, so I'll leave it here... I'm still taking requests! ^^
just nothing too bold? Other than that it's alright.


The Kaiser and Viole finally meet.
Since the Name Hunt Station was unconquered for millennia,
making it fit the both the challenge and the setting was a big consideration of mine.
And even if it seemed a bit untimely I wanted to maximise Viole's dramatic reveal.
Not sure if it worked ^^;;
But since I did my best I will do better next time.
I'm kinda hoping that at the part where Leesoo blows up the escalator
you guys go "Whoa what the", just a little bit.
(The dialogue changed between this and the previews; Reverse Flow-Control is when you stop a
person's Shinsoo through reversing their flow. It can't pause the movement of a Shinsoo bomb)
(When Baam stopped the remote during his battle with Mule Love, he used a complex Shinsoo
control technique, and wouldn't have worked against the Shinsoo bomb at such distance)


Leesoo has a talent at stealing the scene looking cool ^^;
Between Team Leesoo and Team Baam, the relationship is not quite
a unified team like Baam-Koon-Rak, but more of friends/rivals.
In the narrative, Team Baam, Team SnS, Team Leesoo, and Team Ran and others;
they are all allies but they will independently come together and separate as the chapters go on...
Of course, at times they would be enemies.


And Hatsu's got a new sword; what kinda blade shall it be?
Will it be better than the Workshop Battle's pipe?
I personally love Hatsu but since he's too righteous at times I do want to torment him ^^;;


Well, stay tuned for next week!
Weather's slowly getting cold (still hot during the day),
stay healthy and have a good week!
I myself have a bit of a cold so I'm being careful myself ^^
Thank you ^^


ps.
I'm still accepting applications for helpers.
If interested, please send an email to
optifree03@gmail.com
with a bit of self-introduction, contact information (Kakao, phone-number) and a portfolio.
That would be much appreciated.