39F - Hell Train: The 'Name Hunt' Station (16): Koon and Baam are caught in Alphine's trap. Alphine locks both of them in her specially built chamber where she releases Shadow Fox to dispose of them. Meanwhile, Lilial reveals to Androssi that their fight is but a distraction while Shilial captures Androssi's teammates and forces them to reveal the truth about Androssi's relationship with the Slayer Candidate.

Shilial seeks a duel as a swordsman

Baam and Koon struggles against the Shadow Fox

Yukan is devoured by the fox 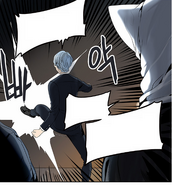 Koon tries to force the wall

And the group found a way to escape

Alphine speechless.
Add a photo to this gallery

This chapter didn't have any requests, so just a summary-ish sketch.
I'm still accepting requests ㅎㅎ


The story of Andorssi and Lilial, Shilial and Hatsu's battle.
Team Baam heading to the Kaiser.
This chapter felt like a bridge to the next one.
Since I'm starting to live in Seoul I'm having trouble learning its geography.
There are so many bridges in Seoul ㅠㅠ.


There was a brief explanation on Anima.
Functionally a Bowl and a Lighthouse are functionally similar.
The Inventory, the Pocket, and the Lighthouse (three inventions of the Workshop):
all other items either came from them or they were made from previously existing items that the three inventions picked up from.
In the case of the bowl, it's the latter.


The skill of Anima existed before the 10 Families entered the Tower.
And the Lo Po Bia family acquired that skill so the limits or the exact mechanics
of Anima are not quite known.
It's in some aspects magical, and it relates to contracts with the Administrators, and Name
Hunt Station's rule aren't too far-laying from this.
Not everyone from the Lo Po Bia family are Anima, but they all have the potential.
And a few of Lo Po Bia elites have abilities that are on a whole new level from standard Anima.


Using an entire room as a Bowl is a very specialised situation.
Bowls are usually best when portable and the Shinsoo must be changed regularly
(t/n: like a fish tank) to maintain control over the creature you control.
Even Koon's method, without the Thorn's ability and Koon's skill with the Lighthouse,
would be a hard solution so Name Hunt Station is difficult to befall.


Between Shilial and Lilial, Shilial is the "unni"(older sister, girl subject)
but since they're twins... well it's closer to a pecking order.
Lilial follows Shilial more.
Shilial having learned sword fighting for a moment is true.
But considering her age, our briefly and their briefly is not the same;;;;


The physical durability of the 10 Families is being discussed recently.
Even the 10 Families cannot be compared physically with Zahard's Princesses.
Most Regular Princesses have a lot higher physical durability than average Rankers.
As Quant said in Season 1, Rankers are superior in Shinsoo control and technique so they can be overall more powerful than a Princess, but that gap is caught up rather quickly.
Baam is the opposite of a Princess where he is strengthening his physical to the max as he learns Shinsoo techniques...
Of course, Baam is growing at an OP rate to really say that.


Next week.
Will Alphine open her mouth? Will they meet with Kaiser?
It's on the previews but waiting is a unique fun.
(Of course, I'm thankful when you buy)
(Also this chapter has more combat scenes from the preview version, so you should reread them)


Well I hope you look forward to the next chapter.
Go out and enjoy the good weather, but watch out for the cold in the changing season.
I'm enjoying the weather because it's weather much better to work in.