39F - Hell Train: The 'Name Hunt' Station (15): At the second entrance to the floating island, Androssi notices somebody is following her. In the meantime at Alphine’s chamber, Alphine reveals that the true overlord of the station is none other than the Ruler of the 39th Floor: the Lo Po Bia Family. Alphine tells how Kaiser at the age of 14 was chosen to become a Princess of Zahard and the reason for her failure, which prompted her special servitude at the Name Hunt Station. Meanwhile, Androssi discovers that her pursuer is none other than Lilial Zahard, which seeks to defeat Jyu Viole Grace and obtain glory by defeating a Slayer Candidate. 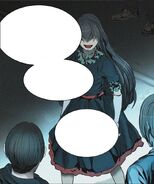 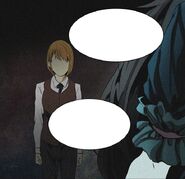 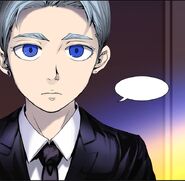 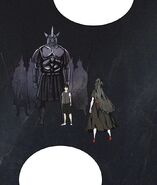 This is the afterwords for Season 2 Chapter 212.


I was told that after this week the heatwave would end...
It's hot.
Hot.
So I drew something cooling for this post's pic.


This chapter revealed Kaiser's hidden back story.
This doesn't justify her, but it does explain how she was chosen as a cog in the
wheel of Name Hunt Station and forced into her position.
Kaiser has a larger amount of guilt for her family than for the Regulars
of the Name Hunt Station, it is rather unusual.


Since this chapter is about the Princess of Zahard the chapter features an exceptional amount of Princesses.
In reality, you will rarely encounter a Princess of Zahard.
If you meet her as an enemy you can consider yourself dead,
and becoming her ally would be very difficult... and complicated...
They're someone hard to approach for sure.


Lilial and Shilial hold the key to one of the two big upcoming story arcs so they appeared ahead of the power curve.
The specifics will be revealed in the later stories.
They both have strange names, but when you say their full names it actually works out.
I personally prefer Shilial over Lilial. She's easier to draw. Lilial's hard. Anyway, neither have shown much of themselves so keep an eye out for them ㅎㅎ
And also their relationship with Androssi.


On the events on Team Baam... what the fox will do is the main concern.
Don't die kids.


Well, I hope you look forward to next week and take care of yourself in the last days of the heatwave.
Have a good week.
Thank you!
[1]