39F - Hell Train: The 'Name Hunt' Station (14): The confrontation between Khun Ran and Arie Inieta begins, as Ran uses the Redan from the start. Ran recalls old advice should he face a Regular from the Arie Family: instead of dodging and figuring out the patterns for their sword he must withstand the slashes with his body and strike back with an even more powerful attack. Cornered, Inieta decides to ignite Krishna and deal a final attack, ending up with the attack blocked by one of Xia Xia’s Lighthouses.

In the meantime, at Alphine’s chamber, the latter decides to show the path leading to the Grand Gallery, should the Slayer Candidate prove to her if he is qualified to free Kaiser from the shackles that have imprisoned her at the Name Hunt Station for a thousand years. 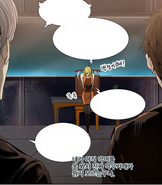 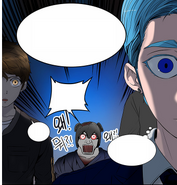 
Coincidentally, this is going up on Independence Day.(1)
Let us have a moment of thanks for those who fought for the country for their lives ^^


Getting Monday off is a bonus, although not for me ㅠ.
I hope you guys have a good extended weekend.


On Ran vs Inieta...
If you guys saw it over the preview chapters you would have noticed,
but I added a few more cuts.
Since I don't have a lot of margin in work between the weeks
I have trouble raising quality naturally,
but I worked on the section of the previews I was disappointed in and added more up it.
Of course, I won't ever be fully satisfied with it ^^;;


Ran's Lightning Pill lasts longer now it feels.
He's still attacking strongly but at the same time more controlled.
This is why being gifted is scary ㅎㅎ


Inieta is not a direct descendant as said, but he's exceptionally talented.
Someone of direct descent from the head of the house's own blood is frequently considered gifted, but direct descendants aren't always better.
In the case of the Arie Family, there is a special blade (t/n: multiple identical blades) only
passed down to the direct descendants.
They are the family with the most stringent rules when it comes to bloodline.


On Khun and Baam's side, Alphine finally opens her mouth.
Next chapter will delve right into Kaiser's story.
Side note, Khun didn't cut his hair, just combed it over. With a lot of hairsprays.


I hope you all look forward to next week ^^
Have a good week everyone
Thank you!


Translator's Notes: Korean independence day is on August 15th,
and celebrates Korea's independence from Japan following the end of WW2. [1]