39F - Hell Train: The 'Name Hunt' Station (11): Rak Wraithraiser, Yeon Yihwa and Hong Danhwa become the property of Kaiser, as she intends to sell them at the auction. Koon and Baam are shocked after finding out Inieta belongs to the Arie Family. Variel Vani seals Baam's companions in a container, as the preparations are complete to begin the Festival. The gallery separates from the Name Hunt Station, marking the opening of the Festival. Kaiser announces to all Regulars at the station that a special event featuring a battle between Jyu Viole Grace and Androssi Zahard will take place during the auction. As the auctioneers arrive at the station a familiar figure is shown amongst the invited guests. 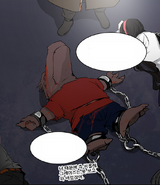 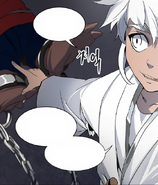 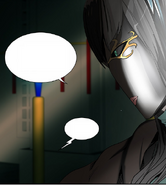 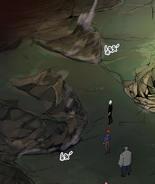 The remains of the battle 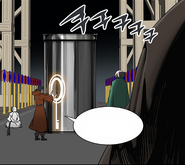 The hostages are sealed 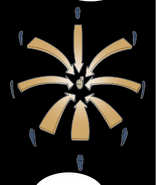 The gallery and the stage 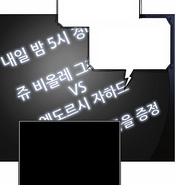 Jingsung appears
Add a photo to this gallery

Unlucky Stick-candy that became a no-named because of copy-hammer.jpg
Young Androssi as requested.jpg
Hello, this is the afterword for ToG chapter 208.


It's really hot nowadays.
Where I live, for Seoul at least, has a lot of greenery so cicadas are loud in the mornings..
I wake up before the alarm because of them..;;;


This chapter..
revealed why this is called a festival. (T/N: Not exact translation, no direct word)
"Festival", in its literal meaning is an event in which one tests the others' skills.. or an event where one becomes an audience member
so many of you may have wondered why it's called a "festival".
It's also a place that Rankers made to control the Regulars, it seems ^^
And... at the end, Mr. Ha Jinsung..
The stage is all set, so it's a full sprint from next week.


By the way, Ha Jinsung looked older in the previews


Since I live alone..
and I work a busy life so I skip meals..
yet I'm getting fatter.. Like I'm swelling..


And... this is a bit of a sensitive issue so I thought about saying something specific,
but regardless of nationality, race, ideology or belief, regardless of all those,
I thank those who read my webtoon..


Some of you might have been offended by one of my assistants' past Social Networking Service messages,
but I don't keep a certain group out and I don't ask people not to look at my work if they don't like it.
Please enjoy my work.
Among all the complex ideologies and accusations,
there is only one reason why there's a triangular relationship between me, you guys, and this webtoon.


(The assistant has her own thoughts,
and her words are being misinterpreted,
so I shall settle the issue with her privately.
I apologise for the worry ㅜㅜ)


(The assistant felt sorry about the issue and is taking it hard
so she stepped down voluntarily and I accepted it.)


..Now that that's out of the way.
I actually had just heard of this today so I wasn't sure what to say.
If my webtoon had a certain ideology or claim I could have something meaning,
but this webtoon just shows a society in a light-hearted (sometimes not so much) manner
through the lens of Adventure-fantasy..
+ love.


I wished to talk about it in a way that related to that.^^


Well.. thank you to all of my readers.
Really, I'm not even that big of a person, why would I be receiving such attention and love...
I'm just thankful for your support..^^


Have a good week,
and I'll come back next week after working hard.