39F - Hell Train: The 'Name Hunt' Station (9): Baam tries to explain to Androssi why he needs Kaiser's name too but Androssi is having none of it and says she'd make him her servant by force.

Meanwhile, Hatsu makes it pretty clear to Koon that they were enemies now and, seeing no other option, Koon draws his knife and gets ready to fight. Much to Leesoo's chagrin, the two begin fighting intensely. With the two relatively even, Hatsu tries one more strike to stop Koon. Both leave their marks on each other but Koon mentions that he had succeeded in getting past, noting that neither of them could cut the other down. Koon returns to an alarmed Xia Xia with the latter informing him that Baam was in Androssi's room.

Androssi is madly cackling about stealing his name by force, until Koon barges in and bluntly tells Androssi they weren't going to give her Kaiser. Androssi asks if he really meant it and Koon confirms it, explaining their reasons why. Androssi exclaims that her life was on the line, but Baam cuts in and tells her that they weren't going to the Floor of Death just for Rachel but also so he could find out more about himself. Not the answer she is looking for, Androssi gives Baam an ultimatum: choose her or Rachel. As they leave Leesoo's team's residence, Koon mentions how much of a mess it had become.

Elsewhere, Kaiser returns to the grand gallery with Lilial & Shilial noting that she failed to get Jyu Viole Grace's name. Alphine then informs Kaiser that Inieta had violated her orders to stay hidden. Initially annoyed, Kaiser then sees that it could work in her favour and orders Alphine to tell the remaining Ten Bosses to converge on Inieta's location, as they were going to capture Viole's companions and put them up for an "auction". Meanwhile, Inieta and Rak continue fighting with the latter noting how serious the situation was, being unable to see Inieta's sword. 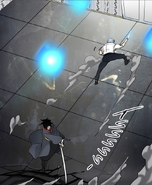 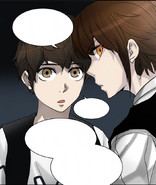 Why are you interrupting me..? 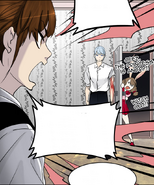 My life in on the line here!!

We'll try to find a way by tomorrow. 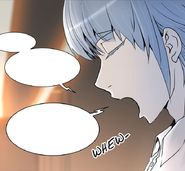 Did you have a nice trip?

"Merciless Station"
Add a photo to this gallery

Hehehe they're fighting hard.
Personally, I do enjoy subtle rivalries like Koon and Hatsu.


If you ask me who's stronger...
Well, Koon's got better physicals but Hatsu has the better technique, and Scouts are better at melee than Light Bearers,
so comparing them would be odd.
Hatsu would have a better offence, Koon with a better defence.
If Koon trained in a position that wasn't Light Bearer he may be stronger.


A lot of stories can come out of Team Leesoo and Team Koon's conflict,
but Leesoo had to make that choice for Androssi, and "borrowing" the name Viole means using the power of FUG,
so neither Baam nor Koon would look at it favourably.
After all, this goes against Baam's attempt at setting himself apart from the FUG.
Hatsu has strong faith in friendship so he chose Androssi to help in that regard.
Hatsu is sincere but doesn't emotionally calculate the most complex things before action. ^^;;
It's the opposite of Koon. If that's charming, I suppose it could be.


Inieta is a greatly strong enemy in this arc.
There was a controversy thinking he wasn't real, but he's indeed from the Arie Family hehe. He uses Arie-style swordsmanship as well.
It's not an exact copy of their direct ancestor's, but still talented.
Anyways next chapter will be the continuation of Inieta vs Rak.
Next time on Tower of God... I hope you are excited ^^


Personally, due to work issues I've moved up to Seoul and I'm feeling scatter-brained.
I found a few good restaurants,I found nice cafes to work in, but since I'm alone in a new place, it's hard to get used to.
If you live in Seoul, you might have seen me ^^;; I've been posting details on Twitter.


It's hot nowadays, please watch out for your health, have a happy week, and I hope to see you again next week.
And thank you all those who congratulated the six-year anniversary last week, thank you all so much.
Have a good week!
Thank you ^^
[1]