39F - Hell Train: The 'Name Hunt' Station (7): As the no-named praise Jyu Viole Grace as their saviour, Xia Xia interrupts them and announces that Viole needs to rest in preparation for his battle with Kaiser. She continues to announce that the intermediary battles shall be carried out by Sachi, Yihwa, Hwa Ryun and Rak whom she also introduces as Viole’s faithful sidekicks nicknamed “The Four Lords of FUG”. She addresses them as the Cruel Wizard, Sachi Faker; the Terrifying Flame Human, Yeon Yihwa; the Ultra-Precise Human GPS, Hwa Ryun; and the Real Monster born on a banana plantation, Rak Wraithraiser.

Following Xia Xia's speech and the no-named disperse together with "The Four Lords of FUG", Khun immediately and threateningly approaches her and demands an explanation of the situation. Xia Xia reveals that this is all part of the Leesoo's plan to reclaim Androssi's name. While Khun is venting his anger at Xia Xia, one of the no-named interrupts them by suddenly approaching Viole and begging him to avenge him and his team. In the meantime, Leesoo and Hatsu are observing the situation from afar and Leesoo remarks that everything is going according to the plan so far, but the 10 Bosses are still no where to be found. Leesoo then receives a Pocket message from Khun saying simply "I'll kill you when I see you", and the intermezzo ends when Hatsu ponders whether Kaiser is more cautious than they expected and Leesoo raises the possibility that Kaiser might actually be more aggressive than cautious.

Khun finally cannot take the begging no-named any more and tosses him away from Viole and explains that Viole is not some wish-granting machine. Before anyone can properly react a masked woman appears while expressing her joy at locating Jyu Viole Grace so easily. The no-named immediately identifies the masked woman as Kaiser, which causes great shock to everyone present as well as to Leesoo's group who are contacted by Xia Xia.

As Kaiser and Viole exchange words about Viole and his purpose on the Name Hunt station, the no-named who was previously chastised by Khun regular suddenly launches assaults Kaiser only to end up with a disintegrated arm. Seeing this scene, Kaiser reminds everyone about the rule that one can fight Kaiser only when they earn the right to participate in the festival, or Kaiser when challenges them beforehand, otherwise they shall disappear instantly by the order of the Floor Guardian. Following the lecture and complete disintegration of the attacking no-named, Kaiser challenges Viole to a match.

During the battle it is revealed that Kaiser possesses both an Invisible Inventory and an Armor Inventory; items even a Ranker would find difficult to obtain. Khun ponders how such items came to be in Kaiser’s possession, considering one would have to be as crazy as Khun and rob a treasure house of the Ten Families in order to obtain them. Khun concludes that these items were most likely given to Kaiser in order to help her fulfil the role at the Name Hunt station. And he further speculates that even such high-ranking items should not be enough to maintain Kaiser's position at the station for over a thousand years or to defeat a Zahard Princess, which suggests that Kaiser must be still hiding something.

When Viole is finally about to unleash the Thorn and Kaiser is about to use her "power", the fight is interrupted by Androssi's sudden appearance via Bong Bong. After Androssi declares Viole to be her man, she teleports everyone to the safety. 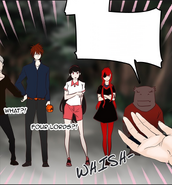 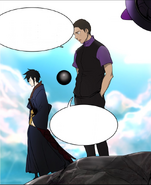 No name vanish after attacing Kaiser. 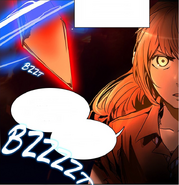 Androssi came to take baam with her.


It's been raining, so the night's gotten cooler.
It's been a series of frustrating and difficult events but the rain's cooled off the stress,
makes a good work environment ^^.


Bong Bong, as an item from the Workshop, is very useful.
Androssi + Bong Bong among Regulars is practically OP...
Like the Blood Tamara that the Mad Dog took, it suits the user well.
If Androssi lost with that, Kaiser must have something up her sleeves hehe.


Next week we'll see Inieta likely...
Actually, Inieta's a name that was changed last minute, so I still confuse myself...
Sometimes I make a contraction between their family name and their personal name.


Recently people have been sharing incorrect lore in the comments.
I do not talk about my work in private places...
My friends aren't in the Manhwa business... and next-to-none of my friends read my work ^^;;
They're spoilers that aren't in the cafe or the blog, but the spoiler shall not be revealed.
I'm sure it was for fun, but if that spreads other readers may become confused so
those who post them and those who share it, I request you guys to stop that.


Recently a lot of Webtoon authors have been on making a presence on TV,
and bringing a lot of controversy due to some issues but I'm not the type to really enjoy
this so I have been careful when I call myself a webtoon author (offline).
But when they do recognise me, I feel good, so... hehe there's an irony there.
I wish the best for everyone being active.
I don't see the others too often, but they all look like nice people...
I think they'll be doing good.


We're half way through 2016.
It was a chaotic half of the year, had a lot of personal hardships...
vv Harder than last year.
I hope the next half of the year will be better, a new start.


Looks like a lot of you student fans have taken tests, (so I threw a little coffee event~)
I wish you good results, and if it falls short it's alright, so I hope you are happy!
Well, have a good week, and I'll see you in the next one!
Thank you ^^
[1]