39F - Hell Train: The 'Name Hunt' Station (6): Baam and the rest descend to the station, where they are greeted by a contingent of bear-like soldiers. Baam is troubled when the name Jyu Viole Grace is announced instead of his own original name. Koon and Baam find this strange because they erased that name after the Workshop Battle, but Sachi intervenes and states that someone at the station must know about Baam’s history. While Rak, Koon and Sachi are fighting the bears at the entrance of the station, the events shift to Novick's team where Xia Xia is attempting to wake up Ran, who lacks any motivation to follow such a ridiculous plan.

The story goes to the announcement studio of the Name Hunt station that has been seized by Anak. With her weapon pointed at the announcer's throat, she instructs him to read the name Jyu Viole Grace instead of 25th Baam. The announcer wonders why he was tasked to announce a different name, but he is interrupted when Anak requests him to broadcast a message saying: “Jyu Viole Grace, the FUG Slayer candidate, has arrived to free this station. All no-named who wish to reclaim their names, please open the door and come outside. Join the Jyu Viole Grace’s revolution”.

Koon explains the circumstances, rules, and the pyramid slavery system of the Name Hunt station. Xia Xia rushes to meet up with Baam’s team shortly after Koon's exposition ends, but it turns out her enthusiasm comes from the promise of payment. She is ecstatic when Koon finally transfers her the money, and joins Baam's team to guide them to the others.

As the group heads to the no-named dormitory, Xia Xia explains the recent developments at the station, and she ultimately hands Baam a wig and tells him to be Viole again for a while. The moment Baam puts on the wig, several no-named emerge from the surrounding forest and swarm around the Slayer Candidate declaring him their saviour. A flashback of the discussion between the Team Novick and Team Leesoo occurs. Leesoo describes the rules of the festival that is going to take place in the next two days, and he also mentions their plan to get the names of the remaining Ten Bosses and challenge Kaiser. However, a major problem arose because the remaining 5 bosses appear to be in hiding. Leesoo suggests to use Viole’s reputation to cripple the foundations of the Name Hunt Station, and to draw their enemies out of hiding.

In the meantime, Alphine reports to Kaiser the most recent developments at the Grand Gallery. While the two princesses chat about how smart Viole is to incite a revolution, Kaiser suspects that the situation is somehow fabricated. Furthermore, Kaiser orders the remaining Ten Bosses to "Absolutely not fall for the enemy's provocation, and to keep themselves completely hidden until the festival is finished" and to "not ever lay a finger on Jyu Viole Grace" because Kaiser is going to deal with him personally. Some of the remaining bosses accept the order without a question, some only show a grudging reaction, and one of them openly disobeys and heads out to join the fight. 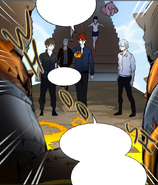 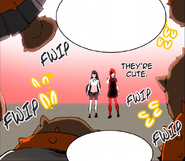 Anak at the announcement studio.

Rak through the spear. 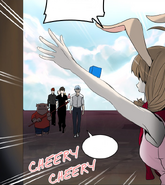 XiaXia give the wig to baam. 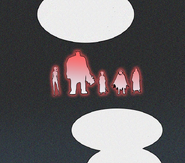 Leesso Suggest to use Viole. 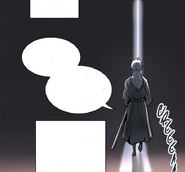 "Arie Inieta" head out for fight.
Add a photo to this gallery


This is the afterwords for chapter 203.


'Somehow' Baam's now Viole again...
Actually, when I had first sketched out the chapter,
I went to the Fan Cafe meet up and somebody asked me to put on Baam a Viole wig, like an event.
Was I beaten to the idea or something?;;;;
I couldn't spoil anything so I tried to squiggle out of it. ^^;
When I'm... surprised like that I can't react.


Baam and Viole are two sides of a coin,
so as needed sometimes you'll see Baam as Viole.


The reaction of the No-Named in this chapter towards Viole...
A Slayer Candidate is to a normal Regular something even bigger than a High Ranker,
so rather than thinking that Viole himself is going to rescue them,
it's the FUG that they think they'll be rescued by.
That's why the No-Named were moved, it would seem.


The Name Hunt Station should be a look into how the rulers of the Tower intervene
in the spaces of the Regulars,
and how the Regulars behave in the presence of said interventions.
And how the Kaiser will be portrayed between them, I wish to draw out carefully.
And the same goes to the Twin Princesses. ^^


I'm lacking a lot in this and that, but I'm always trying hard to make good chapters,
so I'm hoping the outcomes reflect that.
But I'm always feeling like something is missing, and I can't do anything about it.
I'm also always wishing I had better techniques.
I'm not completely healthy either, I wish I was.
But I can't be perfect so I should always try.


The weather's getting hot nowadays, everyone take care of yourselves,
don't stay outside for too long.
Everyone have a good week, and I'd like to see you next week doing well~!
Thank you!
[1]