39F - Hell Train: The 'Name Hunt' Station (4): Several members of Team Ran wake up realizing they were tricked by Chigrinsky, as members of Leesoo's team had arrived and defeated him. Leesoo is glad they decided to rush over, since defeating one of the Ten Bosses enemies would pose an issue for Ran and his teammates. Meanwhile, Androssi decides to get rid of several of Marte's subordinates (one of the Ten Bosses), by using Laure as a weapon.

Back at the No-name Regular’s lounge, Leesoo and Hatsu explain the situation Androssi faces because of Anak. Since Anak is not a legitimate Princess, Zahard doesn't like her too much. Ever since Lo Po Bia Ren discovered that Anak was alive, the Bia Family has begun to raise Anak’s existence as an issue. As the Zahard Family can’t intervene with matters regarding Regulars, they aren’t pleased with Androssi for helping Anak. Since the Princesses of Zahard are rivals with each other, it is disadvantageous for Androssi to climb the Tower alongside Anak. Plus, amongst the D-rank, there are a pair of twin Princesses from the Bia Family who wish to stop Androssi in order to go up to C-rank; to that end, they used the Anak situation to their advantage to get one-up on Androssi.

Lilial Zahard made the first move by proposing a game between them and Androssi: if Androssi went to the Name Hunt Station and took the name of the Kaiser, the Lo Po Bia Family would never interfere with Anak again, and they would hand over Lo Po Bia Ren's life. Anak considered the bet outrageous and thought it was a trap however, Androssi accepted it anyway. Then, when Leesoo's team arrived at the station, they discovered a hidden secret about the station.

Elsewhere, Androssi defeats every one of Marte's subordinates. Androssi reveals to Marte that she knows that many influential families among the Tower use the Name Hunt station as a “Regulars disposal facility” in order to get rid of Regulars they don't like. The phrase "Bring me the Kaiser’s name" is considered a code amongst families to eliminate a Regular since no-one has ever succeeded in defeating him. Those who fail either become no-named or servants due to the legal slavery rule at the Name Hunt station. Furthermore, since it's a station for the Hell Train, no Rankers can intervene. Outraged, Marte tries to strange her with her tentacles, but ends up getting Laure instead, allowing Androssi to impale Marte’s neck with her needle. Marte attempts to steal Androssi's name using one of her many tentacles, however, Androssi uses Bong Bong to destroy Marte.

In the meantime, on the train, Koon packs several items into his Lighthouse but refuses to pack Rak’s bananas. In the end, Baam manages to arrive on time before the train reaches the station. Baam states that he's tired and goes to sleep.[1] 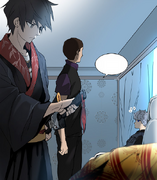 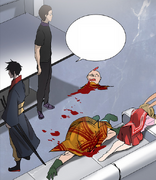 Causing a mess over the residence 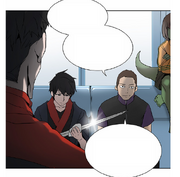 Marte and her goons

Androssi smashing one of Marte's goons

twin Princesses from the Bia Family

Marte defeated
Add a photo to this gallery

This was the first Androssi chapter in a while.
Defeating one of the 10 Bosses Marte in one chapter...
I'm suddenly craving for fermented octopus hwae...(1)


The 10 Bosses are on the stronger side among the D-class Regulars.
But since Team Baam and Androssi got such potential out of the 10 Bosses,
only few are the top of D-class.


The battle between Androssi and Kaiser will be discussed later in detail...
A little teaser would be that Kaiser does not fight like the other enemies until now.


And... Thank you to all those who congratulated me for 200th chapter/birthday.
I'm lacking as an author but since you guys are always so concerned for me I don't even
know what to do/say.
Those of you who sent me your art, gifts, messages.. Thank you, thank you so much.


Next week will focus more on the stories on the train.
It will be a important segment...


Tomorrow (Monday) is Memorial Day.(2)
As we remember those who have sacrificed their lives for the nation,
I hope you all have a meaningful holiday.
Well, have a good week, and I hope you have a good day everyday!
Thank you! ^ ^