The Chapter starts with a brief conversation between one of the ten bosses, Lo Po Bia Alphine, and Kaiser about the events that just happened.

Back at the train, Baam arrives at the Rice Pot to finish his training. The Guardian] notice that there's something different in him, and Baam explains that he aquired the power of the souls during his last battle. The Guardian explains that almost everyone has a fixed limit regarding to power in the tower, but there are those that are special and infinite, people like Urek, Zahard, the Leaders and Baam himself.

Before start Baam's training, the Guardian tells him that he hopes Baam learns his true self and expresses discontent about the change the Leaders brought into the tower.

Baam encounters the Blue Demon again, and tells Baam that he was about to get swallowed when the Souls entered and where devoured by Baam at a tremendous speed.

At the Name Hunt Station, Ran's team can be seen with the company of Chigrinsky moving to the No-Named Area. Chigrinsky explains how the No-Named live their lifes and how to steal the names of the people.

A group of No-Named regulars attacks Team Ran, but they get defeated without much trouble by Novick, Edin Dan, Ran. Chigrinksy says that they should go to the residence fast to avoid future conflict since they were already targeted by the No-Named. Already at the residence, Chigrinksy tells Ran's team that the ten bosses are being hunted down by a Team with tremendous capabilities, and while doing it, manages to drug them and starts stealing Xia Xia's name when Hatsu appears behind Chigrinksy and kills him. 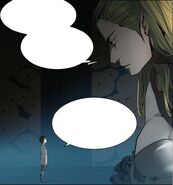 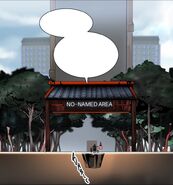 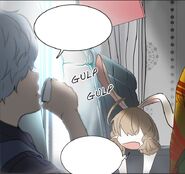 Season two, Chapter 200
Feels like it has a rhyme to it.
Season two's already reached chapter 200...
I feel like I've been doing this for such a long time.
This should be one of the longer works on Naver(1)


Personally, today was my birthday so I got a lot of calls and such from around.
Of course, mainly through messenger and I worked on the comic in a cafe all day hehe.
In reality most of my friends are married and I'm the only one in Sejong City
so I don't have a lot of friends around me here.
To those of you who sent me a happy birthday message over SNS or the internet,
thank you ^^


This chapter... Hmm...
Well Hatsu's cool.
For the first time in a while Hatsu's looking cool.
It's probably from his new sword, but shhhhh ㅎㅎ


So the Name Hunt Station...
Rather than a simple station it's more like a fortress that abuses the rules of the station...
Like Boro said earlier stations are places exclusive to Regulars,
so there's a lot of places that are strange when viewed from the outside.
Since Rankers can't reach the area, in someways it's their isolated region...
If you read further you'll probably understand better what's happening.


I've been confusing myself when writing afterwords due to the preview services lately.
When I said in the last afterwords that Khun was top three melee fighter in Baam's team,
it was only in the previews (it's still going to show up later though)ㅜㅜ.
Sorry about the confusion.


Hatsu, in the last cut, looks slightly different from the previews;
I was trying to redraw that panel,
but I realized it shouldn't be too different,
so I just made small adjustments.


Next week it should be a continuation of more stories of characters from season 1.
And be excited for Baam's story too!
Alright, so have a good week
And I hope you enjoy everyday with the spring weather.
Thank you! ^^


Translators' notes:
1: Longest currently running webtoon on Naver is "Sound of Your Heart" by a landslide (2006), but Tower of God (2010) is still very long for Naver standards. Noblesse is at chapter 407 (since 2007) and God of High School at chapter 259 (2011). Hellper's been running since 2011 too, 209 chapters combined with the new season, etc. So among the four shonen-genre (Hellper being arguably shonen), Tower of God is pretty old. Comic omniverses last longer, but they're a different story. [1]