Ch.19: 20F - The Preys (1): This is the nineteenth chapter of Volume 2 of Tower of God. It follows Wangnan as he goes to seek help from Viole, while Viole is still fighting Love.

After Lurker kills Nia in cold blood, the other Regulars find themselves in an unenviable predicament. Refusing to give up and enraged by the death of Nia, Ja Wangnan rushes to find the only person who can help him against the overwhelming odds - Jyu Viole Grace, whatever the cost.

In the meantime, the overconfident Prince is still holding onto the last remote, but even this little ray of hope is shrinking, for Rapdevil quickly sucker punches him in the stomach, sending him flying across the room.

As time is running out, Horyang decides to forfeit his room to save Prince, hoping that Wangnan will return with Viole and stop Lurker.

While their battle continues, Love can't cease to be amazed by Viole's ability to quickly pick up his techniques and his potential for growth. Though both sides appear to be evenly matched, at one point Love manages to grip Viole's arm and stopping him for long enough to claim the remote. Now that their battle has ended, Love, who doesn't want to fail Viole just yet, proposes this: "Give up on FUG and accept your teammates. That strength of yours, use it for the right path".

But before Viole can answer, Wangnan barges in the room, throws a pepper powder bomb at Love, and snatches the remote. He asks Viole to help him against Lurker, for evil can only be beaten by an even greater one, promising to give him the remote once he's been dealt with. 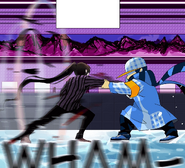 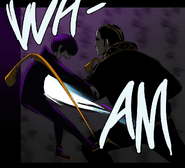 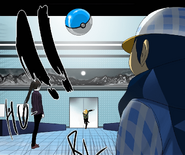 ...due to an extended "Netcan" session (drawing with people over the internet),
I thought of writing this tomorrow,
but under duress by a certain someone,
I'll be writing this and heading to bed.
It's an avid reader who's controlling the author.
Very scary.

Though it is something I said to the manager over email as well,
I really couldn't even fathom reaching 100 chapters before.
I thought it was merely a number before,
but now that I've completed 100 chapters, I feel great at the thought that I've accomplished something.

Compared to other authors, it's a small number, so it's a bit iffy to say it out loud,
but I would like to sincerely thank the readers who have followed me all the way through.
Despite my inadequate skills, so many people have loved this comic and took an interest in it.
So, I apologize for my lack of skill, feel a heavy burden and am also grateful.

This chapter's main focus was Nia and Wangnan from the beginning.
Of course, Viole's story was in there too,
and while Viole is the "key" of this incident, he isn't at the centre of the plot.

Of course, overall, the one that will lead the story will be Baam.
But, Baam isn't necessarily always the protagonist.
I would be grateful if everyone waited patiently for the story of Baam and the Tower. ^^

Truthfully, I tried to do something for the 100th chapter, but due to a cold... ;;
I tried to at least increase the quantity, but since the next chapter is the climax,
I decided to give it my best next week.

Well, you can think of it as something like that. ^^

To those who sent 100th chapter congratulatory fan art,
thank you very much to all of you.
There were more than a hundred... T.T

They will soon be compiled and put up on the blog.
If there is anyone who doesn't want it published, please mail me ^^
[1]

Retrieved from "https://towerofgod.fandom.com/wiki/Vol.2_Ch.19:_20F_–_The_Preys_(1)?oldid=149011"
Community content is available under CC-BY-SA unless otherwise noted.