After clearing the 6th Veil of the Name Hunt station, Ran fruitlessly tries to get one of the enemies to tell him what was going on. With Ran getting annoyed at all the attention they were getting, he states they should go back, only to be reminded that he already destroyed their means of return earlier on. With no choice but to plow onwards, their team continued their movements. Meanwhile, inside the station, Leesoo and his team observe Ran's efforts and get ready to mobilise in order to hunt the "Kaiser". Elsewhere, a minion runs up to a large Regular and tells him that a Khun Family member arrived, eliciting a positive response from the Regular.

On board the train, Baam and his allies pass the 38F stage test whilst Hoaqin and the rest of Rachel's team do the same in another section of the train. Rachel commends Hoaqin for his remaining strength but the latter scathingly replies and reiterates his intentions before asking what Rachel planned to do before reaching the Floor of Death and if their enemies were dead. Rachel says they were still alive, causing him to spring to action, but she tells him his impatience was a flaw before mentioning that she had a plan and he should wait or he could screw it all up.
As Baam's allies waited to arrive at the next station, Yuri reveals the plans to go to the Floor of Death, causing some of them to ask why they would go there. Khun explains why and mentions they didn't have to come if they didn't want to, with Yuri backing up his sentiments. Asking if anyone wanted to stay behind, they all said they wanted to go which prompted Yuri to tell them their assignment: to steal the 'name' of a person called "Kaiser". Sachi immediately recognises the name and explains who Kaiser was and also how the Name Hunt station worked. Evan corroborated Sachi's words and told them all if they took Kaiser's 'name' during the time the train was stopped, they would pass the test imposed by Yuri. Later on, Baam remembers he had unfinished business and returns to the Rice Pot to finish his training.

At the entrance to the station, Ran's team is greeted by Hesse who tells Ran to give him his name... 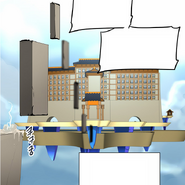 The front view of the Name Hunt station 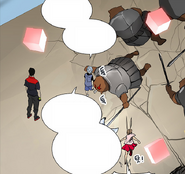 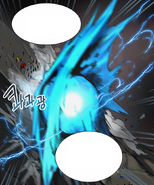 Ran destroying their way back because of his irritation 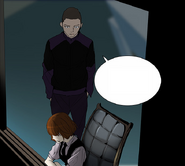 Rachel says she's got a plan... 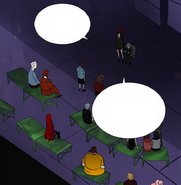 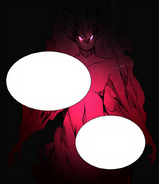 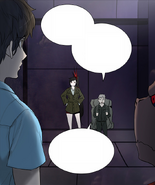 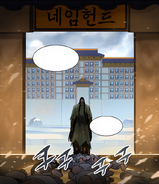 Team Novick receive a warm greeting!
Add a photo to this gallery

Ran continues to appear from the last chapter.
Ran is a character I personally enjoy and I think he and Anak are a good pair,
so it's fun in multiple ways.
Since he has Khun Maschenny bloodline, he has the "genius" trope as well.
I think I said this before, but he was inspired by Dragon Ball GT's Goten.
If you can't see it, it's his short arms and legs...
I'll explain more next week. ^^;;


Baam heads back to the rice cooker.
Is he going to come out more cooked, we'll have to see.


Since the last Hoaqin match was super long,
I don't think this Name Hunt will go for long.
Of course, there will be a strong opponent who calls himself Kaiser,
but overall not that long...
But not only that, it's possible that the story might go off in a completely different
direction.
I hope you guys are excited ^^;


Since there are people who do use the preview service have read it ahead a few weeks
I get confused whenever I'm writing these afterwords.
I hope those of you who look ahead enjoyed as well.
Please avoid spoilers and please show attention and love to the live chapters^^


I also put in a request for a thumbnail change, a change of mood.
I hope you guys like it.
With that, I hope I'll see you next week our cutie pie Ran!
Thank you ^^