38F - Hell Train: Yuri Zahard (2): Baam convinces Yuri to stop pursuing revenge against Yu Han Sung. Khun shares his plans into chasing Team Rachel on to the Floor of Death. Due to the nature of the 43rd Floor Yuri offers her assistance, but only if she considered Baam and his teammates competent enough to challenge the place. Meanwhile, Hwa Ryun meets with Ja Wangnan, who blames itself for not catching Cassano and allowing Vicente to be absorbed into Hoaqin. The Guide recalls that as long Wangnan remains on the Train another opportunity shall arise, yet another crisis would follow that would cost him the life of one of his teammates. Sachi Faker announces that due to the train conductor's death a substitute test will take place in order to reach the 39th Floor section of the train. As the stage test takes place, Yuri and Evan proceeds to evaluate Baam's teammates' and skills.

Elsewhere on the 39th Floor, Team Novick arrives at one of the Hell Train's stations, the Name Hunt Station, while several members from Ship's Team watch the newcomers from afar at the station. 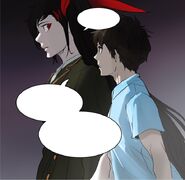 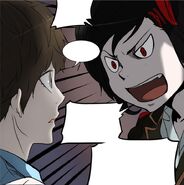 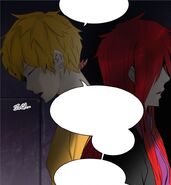 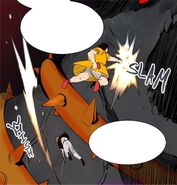 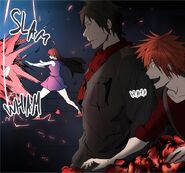 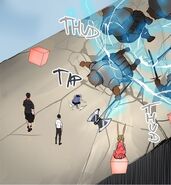 This is the afterwords for Season 2 Chapter 197.


Androssi is back!
It's been a while so I had a bit of trouble drawing her.
I hope she looks good here,
Leesoo is just there as always,
trapped between two princesses as entourage.
(That's his charm).
And Lauroe is sleeping as always.


To explain the convo between Hwaryun and Wangnan here,
Guides are like a human GPS that can tell the best move or make predictions,
but how that comes to be is not known until we get there.
So even if they predicted that someone would die in a month
they cannot give any specific way to avoid it, but they can try their best.
Of course, a prediction a day or an hour ahead can be more detailed,
but you can't avoid it once you end up at the wrong path.


As you can probably tell from this week's chapter,
you can expect Namehunt Station to be the main stage.
Team Leesoo and Team Ran will be more featured than characters from season 2,
but they'll all be together anyway.
But for now, I'll focus on the present.


I've heard that I have too many characters,
but in my opinion I think the diverse cast of people climbing give a sense of life unique
to Tower of God so I plan on sticking to it despite the chaos.
Even if it's a bit hard to draw.
Next chapter, you should look at who's showing up,
who's the main character here, that will be fun.
I'd wager that Androssi will become the main... I'd say...


Over the weekend my keyboard broke,
so I went to buy a new one and I ended up buying a drawing tablet
I always wanted one(which was quite expensive.)
It's been tough for the last few weeks, and it was kind of a "I can do better".


Since the preview services went live last week,
some people like it and some people have been worried;
I repeat myself again, but the hiatus was not for what a lot of you think.
I took a hiatus for end of an arc
but Naver doesn't let/make you take a break for the preview service.
Even without the preview service the hiatus had to be extended,
so on that I am truly sorry.
Just please do not spoil other or illegally share with other people.
There may be legal consequences...


Well that was a long afterword.
Hoping you enjoyed this week's chapter,
I'll come back next week like a zombie! Thank you!
Have a good week!
[1]

Retrieved from "https://towerofgod.fandom.com/wiki/Vol.2_Ch.197:_38F_-_Hell_Train:_Yuri_Zahard_(2)?oldid=143434"
Community content is available under CC-BY-SA unless otherwise noted.