38F - Hell Train: The Dallar Show (20): With Evan telling her to be careful, Yuri begins her onslaught against Pedro's ancient Observer, the "Purple Dementor". After finding and nullifying the Observer's secret weapon and then destroying it with one of her special techniques, Yuri then heads directly for Pedro. Despite him initially dodging her punches, she eventually strikes him with a "nuclear punch", sending him skywards. 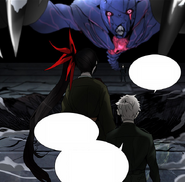 Yuri facing off against Pedro and his ancient Observer

Racing to take on the Purple Dementor! 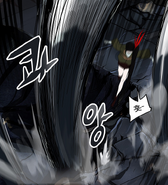 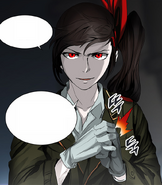 Ready for a Zahard Princess beatdown?! 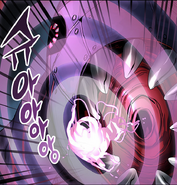 Feeling the power of Ryu flowing through her... 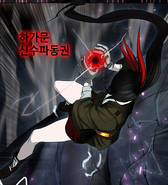 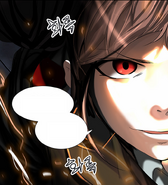 The face of a badass 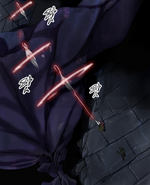 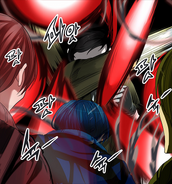 Pedro shows he's got some skill 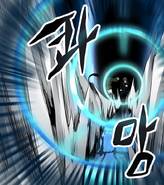 ...SHŌRYŪKEN!!! NUCLEAR PUNCH!!!
Add a photo to this gallery


Yuri is drinking some soda in this picture


Nuclear Yuri is….
She is physically strong, which befits her since she is from the Ha family.
Her Shinsu tolerance is on the high side as well
So you can be assured that her real skill has not appeared yet.
She controlled her power for even this fight as well.


In truth, the appearance of a High Ranker is a calamity for any regular.
It’s normal for people who manage the Floor to warn regulars if a High Rankers appears.
If a High Ranker causes a disturbance,
it’s customary for the High Ranker that rules that floor to challenge the intruder.
You can think of this scenario like an actual nuclear bomb threat...
(You can only fight nukes with nukes.)


Ah, and Pedro's observer that appeared in this chapter,
normally, a person of Pedro's ability would not be able to use such a weapon,
(he was able to use it because he was the conductor of the train)
In reality, it is an excellent weapon and explorer/observer… but the user was a bit…..
If someone of karaka’s ability had used him, even Yuri might have been in trouble


The next chapter will finally be the showdown between Baam and Hoaquin.
Both have the potential to be powerful even among High Rankers,
so this battle may even affect the future of the tower..?


Anyway, I hope you guys are looking forward to the next chapter!
The seasons are changing soon, so make sure you don’t catch a cold!
I hope you will have a happy and healthy week ^^


ps. The new tower of god game is out on android.
http://play.google.com/store/apps/details?id=com.raiz.tog
You can play with characters from Tower of God!
I hope a lot of people will enjoy this game!
[1]

Retrieved from "https://towerofgod.fandom.com/wiki/Vol.2_Ch.191:_38F_-_Hell_Train:_The_Dallar_Show_(20)?oldid=126823"
Community content is available under CC-BY-SA unless otherwise noted.