38F - Hell Train: The Dallar Show (19): Baam berates Hoaqin for his merciless attitude and then jumps down to save Mad Dog, surprising everyone except Rachel and Rak. With Baam racing down at insane speed, he asks Koon to open the submarine door and free Mad Dog, which Koon surprisingly does. At that Baam saves Mad Dog's life, if only just.

Inside the Submarine of Choice, Koon is exasperated at Baam's expected actions with Rachel mocking him for his own niceties. Koon retorts and slams questions right back at her. While Baam down on the field of play makes his intentions to save everyone known, Koon informs Rachel of his own intentions to follow Baam's lead and adds that it was now between her and Baam.

Meanwhile Yuri begins the fight with three devastatingly powerful punches. However Pedro comes out unscathed thanks to the reveal of his trump card, the "Purple Dementor", an item he received from Karaka. Letting Yuri know it wouldn't be an easy fight, the two got ready to continue their duel... 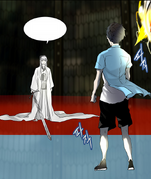 ...and then shocks everyone with his selflessness

Leaps down the central pipe...

...and barely makes it! Save successful!

Rachel and Koon sussing each other out 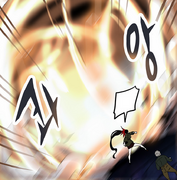 Devastation from a single punch!

Shark vs Blowfish!!
Add a photo to this gallery


Hmmm, Yuri’s combat scene continues.
Baam and Hoaquin’s conversation…
like I said before, both believe that abnormalities and paradoxes can exist,
the difference is that Baam is a bit more kind/human?


Just because he is the main character does not mean that
I want to make him more rational or more just than his enemy.
I just want to draw the most I can from both Baam’s and Hoaquin’s perspectives.


Next week will be Yuri’s turn.
I wonder if her nuclear experiment will succeed.
Then have a great night.
See you next week ^^


ps. The new tower of god game is out on android.
http://play.google.com/store/apps/details?id=com.raiz.tog


It’s just been released, so there can be incomplete sections or some bugs,
but the game should become more stabilised within a week,
so please check it out ^^
I’ll give the game a proper introduction next week.

Retrieved from "https://towerofgod.fandom.com/wiki/Vol.2_Ch.190:_38F_-_Hell_Train:_The_Dallar_Show_(19)?oldid=107813"
Community content is available under CC-BY-SA unless otherwise noted.