With the Thorn activated, Baam drives at Hoaqin with Yihwa attempting to distract him with a wave of fire. However, before Baam can stab him in the back, Hoaqin flanks him but is stopped temporarily by Sachi. Hoaqin once more asserts his dominance over them and Baam has to stop, having hit his limit. Aka gives him words of advice and then tells him of a plan. Baam proceeds to stop Hoaqin, allowing Aka to tightly grab him from behind, but not without getting impaled in the process. With Hoaqin's movements bound, Baam stabs him in the chest with the White Heavenly Mirror but is shocked to find out that their plan to free the siblings' souls wouldn't work.

With Khun's team reaching the core with the sweetfish, the second round of the Dallar Show came to an end, with Hoaqin telling Baam he was very lucky to have such good allies before saying they would settle it in the third round. 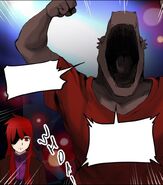 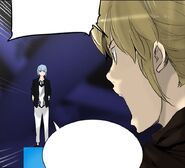 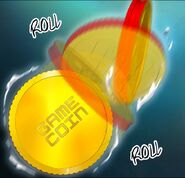 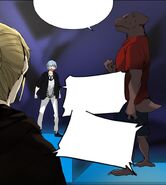 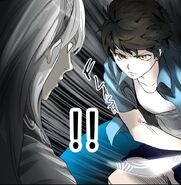 This is the afterwords for chapter 186 ^^
This chapter was a bit long.
While I was madly drawing for this chapter I set a new record for longest time spent working on a chapter..
Regardless I just hope you enjoyed this chapter.


Like I said last time, Hoaqin’s blade has no blind spots.
Whether from the back for super-close-combat, the sword will ultimately land..
Arie swordsmanship is special like that, and there’s no good techniques against it.
Either overpower them with sheer force, or just attack them before they are ready..
Boro’s special so he can block his swords. Imperfectly, but still…


Next chapter will start round 3
As the final round I hope you are excited ^^
Baam and Hoaqin, it’s about time for their final battle.
I will draw harder.
Have a good week
And don’t get sick from the cold weather!(1)


Oh, and also...
Tower of God mobile game pre-order is happening right now.
During development there where various set backs I heard
And for Webtoons this is a rare opportunity
So I hope all of you come with us and help us grow! ^^

I even did an interview, but..
If you want to protect your eyes you probably should refrain from watching...
Since there are two games under development it may get confusing
But please look forward to that one too^^


As always thank you.

(1) Korea’s having a record-breaking blizzard right now (2016/01/24)
(2) Requires a Korean phone number, from what I could gather, also it’s technically pre-register and not pre-order, but I translated pre-order for now.