38F - Hell Train: The Dallar Show (14): Hoaqin tells Baam that he will start his legend by cutting his throat but Baam replies that he doesn't understand him and will never allow him to get loose into the Tower again. Hoaqin says that Baam always speaks nonsense when they meet before trying to cleave the latter in two. The two begin fighting, with the others aiding him, but Hoaqin asserts his dominance and launches a powerful sword slash upon them. As Yuri and Evan realise what family Hoaqin is from, and Hoaqin wondering if he absorbed his siblings' powers completely, Yeon launches a wave of fire at Hoaqin enabling Baam to zoom past him and retrieve the White Heavenly Mirror. Sealing Vicente and Wangnan's bodies in the sword, Baam gets ready to enact the plan he had developed earlier with Daniel's prompting.

Meanwhile, Koon and Rachel finalise the details of their luck-based game before the former throws his dallar in the air to see who would win... 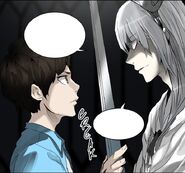 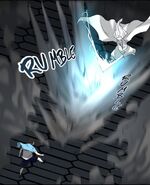 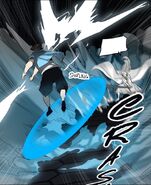 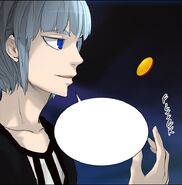 Baam and White, Rachel and Koon, their battles (?) continue
Regardless, the coin has been tossed
And the next chapter will be focused on Koon again.
Since both sides are important I can’t push just one
But I am trying to narrate them both with importance so please have some understanding ^^;;


White’s spell on the train
Is in a way only possible because it’s the train.
Basically he is using the power of dead spirits in the train.
It’s White’s Train-exclusive trick.
But doing so would take a long time and his body wasn’t normal
So even Hoaqin couldn’t board the train and use it immediately


Recently, I wanted to develop more with the execution and technique
So I am trying to show the multiple ways with more improvement
I will work hard to continue showing you good art
My wrists aren’t doing too good
But I take ample brakes so please don’t fear too much..^^;


After drawing Webtoons for six years
I have readers who’ve grown up into college students or societal members (1)
Despite those changes in surrounding, even if it is difficult to keep up
To those who supported me all the time
I want to tell you guys I support you too.
To those who must have had it hard supporting me
I will support you all from now on.
Thank you^^


My post is getting long somehow..
But good things will happen to all of you in the new year
I will try to be a more hardworking author as well^^
So have a good week
And next week I will bring back good news


See you next week^^

Retrieved from "https://towerofgod.fandom.com/wiki/Vol.2_Ch.185:_38F_-_Hell_Train:_The_Dallar_Show_(14)?oldid=126817"
Community content is available under CC-BY-SA unless otherwise noted.