38F - Hell Train: The Dallar Show (12): As Baam and his passengers fly towards their target, Yihwa asks Baam a question and receives a warming reply. Watching from above, Yuri complains about the scenes she gets to watch while Evan wonders who could be strong enough to challenge Baam the Irregular.

In the pipes, Hoaqin details what he plans to accomplish before rounding on the flustered Daniel, impaling him on his sword. Sachi, Boro, Aka and allies then appear and ready to attack but Hoaqin wards them off by threatening to behead Daniel. Hoaqin then gives the three an offer: he would spare Daniel if they sacrifice themselves. Sachi offers to sacrifice himself only but Hoaqin refuses to budge on his original offer. Just then, Baam appears and calls for Hoaqin to stop with the jokes.

Elsewhere in the pipes, Rachel and her allies surround Khun and his team with the former mentioning it was time for the "sweetfish hunt". 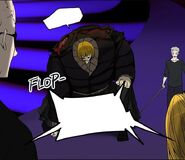 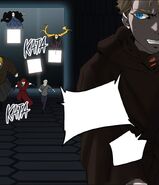 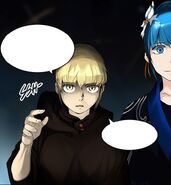 
Baam's... becoming more manly, right?
Since he's a main character who's growing
I'm trying make him look good throughout the moments.
He actually feels (lit. smells, non-negative) like a man, it seems.


Since this was my first time drawing Hoaquin since he became bigger, so I had a bit of trouble drawing him.
His previous image was good but I hope he looks more sinister now.
His outfit and sword were changed slightly as well
I hope it gives a sense of "he's stronger!"
But even now he is not as strong as a Ranker/Slayer


The next chapter will probably be focused on Khun and Rachel,
But rather than focusing on the game itself I used it to make character conflicts
So I guess that? kind of feeling will be the mood for the round.


Recently my wrist's been strained so I've taken the day off
Of course there's no easy way out of "skipping" such an important arc
I'll try my best.


And it seems like with my sad comments last time... lots of people...
I'm sorry.
I had forgotten so many people read the afterwords


Your comments are very important to me(1)
I'm always thankful,


P.s. To those who were selected for the event, due to the new year holidays and such the figures will be delivered a tiny bit late.
I will send them tomorrow so please just hold on a bit longer.
Thank you!


Translator’s Note:
(1) lit. your comments are read with care
(2) Not a literal translation, but a New year’s greeting.