38F - Hell Train: The Dallar Show (4): Baam and his team conclude that they needed to meet up with their allies as soon as possible whilst Sachi and his team make stopping Hoaqin their highest priority.

Meanwhile Bero Beros's team find themselves in a strange room where they soon encounter Angel and the Mad Dog. Attempting to escape, the trio tries to bounce away on the pipes but Yihwa ends up beginning a duel with a charged up Angel whilst Buelsar is left wondering who to take down first. Just then, Baam's team enters into the room with Buelsar and Baam noticing each other. 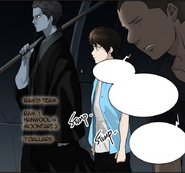 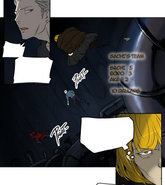 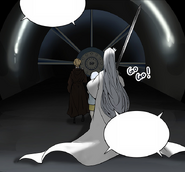 The strange room with bouncy pipes 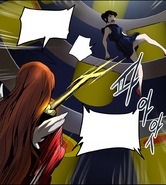 ...only to be denied by Gyetang's older brother big bird! 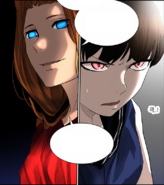 Face off: Angel vs Yeon Yihwa 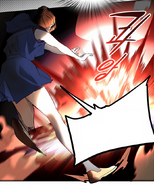 Take this, the flame of Yeon! 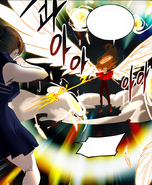 The wings are out, shit's getting real!

"Let's have some fun, fire lady"

Rematch on the cards?
Add a photo to this gallery


so I’m writing this review outside
Guess where I’m at?
I’m currently in Jeonju haha
Because it’s close to where I live
When I want to get some air or thinking of a new storyline
I come here, although I can’t come often since I’m busy.
This chapter included a story about Yihwa
I think the next chapter will include
a bit more about Yihwa
Soon there’s going to be the CSAT (1)
I’m doing an event on Twitter for those taking the CSAT
For my readers who are taking the CSAT this year,
I am sending a cup of coffee to those who send me their Line ID
through KaoKaoTalk(2) or email
If you leave a comment on my blog or my Twitter and send me your ID through mail,
I’ll send you a cup of coffee.
Of course, I can’t do this for too many people. Around 10 people or so.
I hope you’re hyped up for next week :)
Have a great weekend
Thank you!


Translator’s Note: (1) It’s a test similar to the SAT in the United States. Taken once at the end of one’s senior year, your score will decide what kind of school you go to, so many Korean students spend their entire high school years preparing for this one test. It’s an extremely important test, so even airplanes are prevented from landing during the testing period to prevent any noise/distraction during the test. To give you guys an idea of how important this test is, if you get a perfect score, you are practically guaranteed to go to Seoul National University, Korea’s equivalent of Harvard. (2) KaoKaoTalk is basically like iMessages or Facebook Messenger. It’s a standalone app that people use to text each other/send videos/photos/etc.

Retrieved from "https://towerofgod.fandom.com/wiki/Vol.2_Ch.175:_38F_-_Hell_Train:_The_Dallar_Show_(4)?oldid=125608"
Community content is available under CC-BY-SA unless otherwise noted.