38F - Hell Train: The Dallar Show (3): With Team Viole winning the first round of the Dallar Show game, the teams retreat back to their sides.

After a short break, Poro Poe introduces the second round game: "Transferring the Sweetfish". Explaining the rules to the two teams, the Regulars are separated to different locations inside the motor section pipes and then begins the game.

The winner and the loser 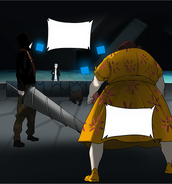 1st Round of the Dallar Show, finished 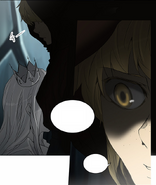 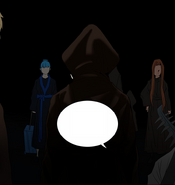 ...and dismisses her from participating 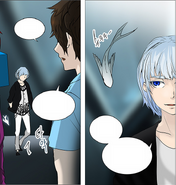 A victorious A.A returns to his side with the sweetfish 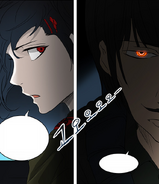 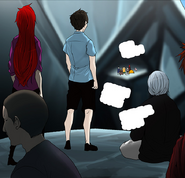 Team Viole waiting for the 2nd Round to begin

The location of the 2nd Round, the Hell Train's 74th motor section 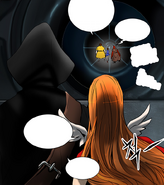 This is the beginning of the new game.
This game will probably be a bit... violent.
The game itself isn’t hard.
You must go through the pipe while transporting the sweetfish,
if you want to stop your opponents,
you just have to pool your dollars together and shut the door.
It’s easy, right?
But since Hoaquin’s group has more dollars overall ^^;
you guys will have to wait to see the result.

This time, I think I’m going to give each character a few more individual highlights.
I regretted not doing this in the Workshop Battle
so I think I might advance the storyline more seriously...
well that’s what I’m thinking of doing anyway ^^
Of course main characters like Bam or Khun will be plenty active as well.


In the next chapter, like most of you predicted, will include a story about Yihwa.
Since Yihwa is, in some ways,
a character that represents the 10 Families in Wangnan’s Team,
among members who aren’t part of the 10 Families or
individuals who don’t have birthright advantages,(1)
she is a character that shows a bit more worried and conflicted aspect of herself.
You could say that her personality is a bit different from Khun’s,
who seeks to gain and use the power of the 10 families,

Of course, the greatest source of Yihwa’s inner conflict is
her natural tendency/character trait, Wangnan, and Baam (Viole).

I hope you’re hyped up for next week ^^
Have a great weekend
See you next week~Thank you!

Translator’s Note: (1) the privileges/benefits that members of the 10 families have had since they were born.

Retrieved from "https://towerofgod.fandom.com/wiki/Vol.2_Ch.174:_38F_-_Hell_Train:_The_Dallar_Show_(3)?oldid=126806"
Community content is available under CC-BY-SA unless otherwise noted.