38F - Hell Train: A Month (6): Yuri uses her royalty to justify her search for "Twenty-Fifth Baam". Elsewhere, having finished the first stage of "Revolution", Baam hurriedly rushes back to his allies so they can go to the 4th stage.

At the 4th stage, Hoaqin's group and Wangnan's group arrive with Hoaqin being notably surprised with Vicente's alliance. With only a little time left before the game would begin, Baam and his group finally make their appearance. 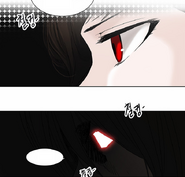 Yuri is a clever Princess

The "god" asking him if he met his true self 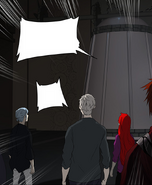 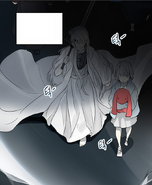 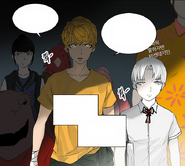 Who's this late arrival...? 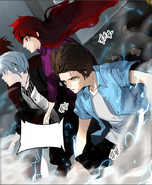 Guess who took a few levels in badass since you were gone Yuri?
Add a photo to this gallery


Anyway, the weather here is cold.
Stay healthy everyone during this changing season.


The 2nd part of Ran’s journey..
I’ll try to post it later next week for those who are interested.
(the problem is that not many people are interested)


Cafe members should have already seen this, but the mobile game test (it’s not out yet) is going to be on the 15th this week.
My heart is pounding.
If it’s confirmed I’ll post a separate notice on the blog^^
It’s on the 15th.


Well, I hope you’re also excited about...the story of our roasted chestnut.
(Translator’s note:it’s a pun: chestnut has the same pronunciation as Baam)
I hope you stay healthy and have a nice week.


See you next week
S.I.U
Thank you~

Retrieved from "https://towerofgod.fandom.com/wiki/Vol.2_Ch.171:_38F_-_Hell_Train:_A_Month_(6)?oldid=126803"
Community content is available under CC-BY-SA unless otherwise noted.