37F - Hell Train: Wooden Horse (4): Koon, Rak and Baam land at the opposite set of train stairs to Hoaqin and the crew, with both sides wondering who each other are. Down below, Boro and his allies are notice the three's arrival and the former informs them who Hoaqin is.

Inside the train, Angel and Mad Dog decide to go out and see what the problem is, leaving Wangnan and Yihwa by themselves.

While the rest of Team Tangsooyook hopes the three arrived on time, Rak openly mocks Hoaqin to the latter's fury. Boro and allies catch up to the three and Hoaqin angrily tries to attack with a shinsoo slash, but Baam jets over and blocks his sword. As the two begin their fight, Rak tries to jump over and get involved but is blasted away by Daniel who hops over and tells them all he wouldn't let them on to the train. He then tells them that they would take control of the train until Hoaqin was whole and Roen was alive. Sachi then says that it was their job to talk sense into Daniel.

Rachel observes Hoaqin and Baam's seemingly even battle and hopes that Hoaqin was stronger because he was the "sword" she chose. Meanwhile Baam realises he is being overwhelmed by Hoaqin and decides to finish the fight by activating the Thorn and attacking with Floral Butterfly Piercing Technique. However, Hoaqin recognises the techniques, realises just who Baam is and counters with a slashing attack of his own... 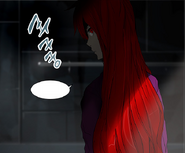 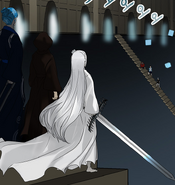 Face off: Slayer white side 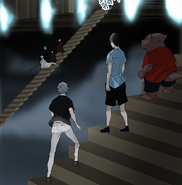 Face off: Slayer black side 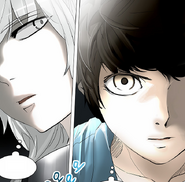 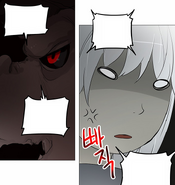 The Mighty Rak has said it! Hoaqin is a squashed-rice-cake! 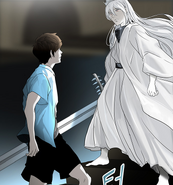 Face off: Black vs White

The Mighty Rak to the rescue... 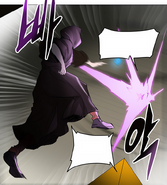 A slicing retaliation!
Add a photo to this gallery

Baam is in an actual danger this time.
The ‘squashed rice cake’ is quite strong, after all.
It seems he knows how to counter Flare Wave Explosion
(Translator's note: Hwajupgongoasul - FUG skill)

Hoaquin’s sword is quite different from a normal sword in terms of movement.
It has none of the disadvantages of being a long sword, such as blind spots.
This is more of Hoaqin being special rather then his sword being special.


Also, I did a advertisement webtoon special for an MMO called Closers.
[Translator's notes: This is not related to ToG nor TUS]

I will try to protect Baam’s face.


Thank you for reading~
-S.I.U

Retrieved from "https://towerofgod.fandom.com/wiki/Vol.2_Ch.163:_37F_-_Hell_Train:_Wooden_Horse_(4)?oldid=126795"
Community content is available under CC-BY-SA unless otherwise noted.