20F - The Untrustworthy Room (5): This is the fifteenth chapter of Volume 2 of Tower of God. It follows Viole as he compete against Love in a game, while Prince is looking for ways to take down Viole.

Viole has arrived in the baths and, after Love explained the rules of the game, he was given a last chance to refuse, which he declined. In the first pitch, Viole stops the connector with shinsu alone and almost gets it but, using shinsu to strengthen his body, Love dashes towards the connector and kicks it into the wall. On the second pitch, Viole appears to try the same tactic, but actually used it as bait to punch directly at Love.

Meanwhile, Prince in his room and comes to the conclusion that it was Viole. As he was raging, two other Regulars appeared and told him they had a way to defeat Viole. Despite Lurker's objections Prince accepts. Alone, Lurker smiles ominously... 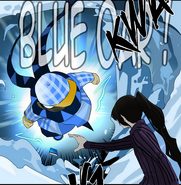 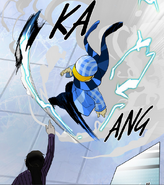 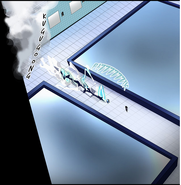 Love kicking the connector into the wall 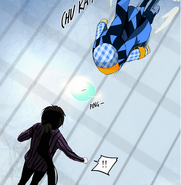 Viole and Love dashing for the connector 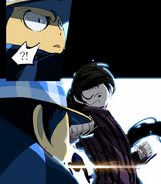 Viole vs. Love
Add a photo to this gallery

I wonder who writes the story of EPL.
I'm very jealous of that talent.
Looks like what's needed for a fun soccer game isn't a good player or an awesome scene, but drama.
Likewise, what's needed in a fun manhwa is drama above action or comedy.
Looks like I delivered (more so than soccer).


Anyways, the mood of the manhwa will turn around a bit starting this chapter.
It's time to reap the harvest of the plot points scattered here and there,
And it's time for Viole and Wangnan's story to start coming out,
and it's time for people to betray each other left and right.
Something like that.


The one who killed Rapdevil...
The answer's already out there.
If you read the chapters carefully, you'll be able to figure it out ^^;
It's not that hard.


I have my training preparation next week, so the content will be a lot less.
It's been a while since I grabbed a gun.
In the army I was used more in reloading the guns rather than shooting them, haha.


Anyways, please look forward to next week, and have a good Sunday!


P.S.
I am unable to accept any more neighbour requests because there is apparently a limit.
I didn't know there was a limit.
I'll try to resolve this somehow.

Retrieved from "https://towerofgod.fandom.com/wiki/Vol.2_Ch.15:_20F_–_The_Untrustworthy_Room_(5)?oldid=149007"
Community content is available under CC-BY-SA unless otherwise noted.