36F - Hell Train: Hoaqin (7): Viole confidently tells Jinsung that he would get on the train before running away with Rak and Khun, as planned. Jinsung nonchalantly catches up to them but Khun and Rak do their best to stall him while Viole gets away. However, Jinsung effortlessly caught up to Viole and told him to stop. Chang and Quaetro then jumped in but were dispatched with minimal effort. Once again telling Viole to stop running, or else, Khun suddenly teleported everyone to his location via his Lighthouse, successfully executing his plan to misdirect Ha Jinsung.

In the train, Ja Wangnan and Yeon Yihwa look on in shocked disbelief having witnessed Hoaqin's power as their group successfully passed the 36th Floor test stage. 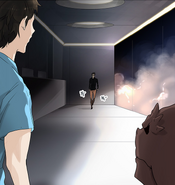 The Terminator Ha Jinsung is coming! 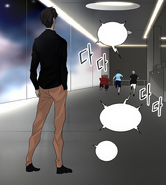 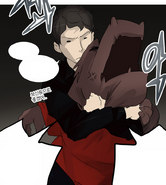 Stupid candy turtle!! Get your hands off of Rak-leader!!

Khun: The Face of Embarrassment 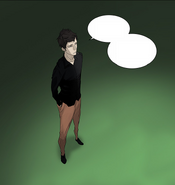 Did you really think you could escape HA JINSUNG?!

Chang & Quaetro having a go against Mr. Ha

I think Jinsung should play soccer football with a kick like that! 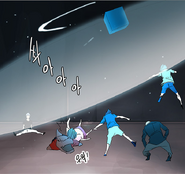 Verdict: Hoaqin is a monster


This was the first chapter in a long time since Khun last got to shine.
If this weren't an area for Regulars, Ha Jinsung would have caught them all...
But then, it's because he is Ha Jinsung that he was able to get away with causing such a mess.
Most Rankers would have been executed right away.
On Lighthouse-to-Lighthouse teleportation...
A hastily done teleport like this is unlikely to work like it did today.
Using it in the middle of a battle would be a very dangerous move that only veterans can pull off.
Of course, there are some very skilled Lighthouse users who can kill using teleportation alone.
Hoaquin is... savage as ever.
Well, he really is in a different league compared to enemies so far (excluding Urek)