36F - Hell Train: Hoaqin (5): The freed Hoaqin introduces himself to them. Elsewhere, on the 37th Floor, Boro recounts his past and the first time he met Hoaqin to Hanool Kang and Hong Danhwa.

Hoaqin notes the group's reactions to his appearance and egotistically assures them of his power. Mad Dog introduces himself first with Rachel introducing herself and the others next. With his stomach rumbling and the introductions out of the way, Hoaqin proceeds to leave, with the others following him. 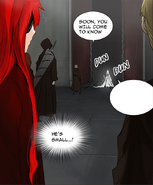 Soon you will come to know how small Hoaqin is! 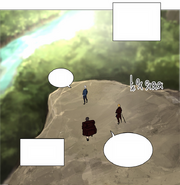 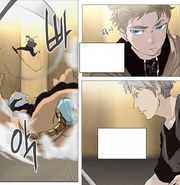 Poe has been touched by the kindness of a goddess... 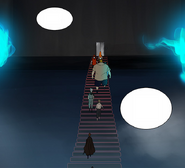 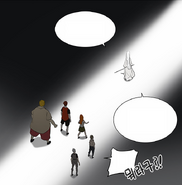 Their first meeting with the Slayer candidate "Hoaqin" 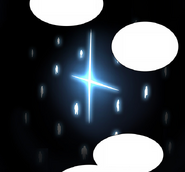 Introducing the elderly to new-fangled technology 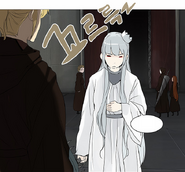 You can't conquer the Tower on an empty stomach! 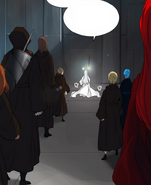 Autobots, roll out! Hoaqin & squad on the move!

This is the 5th anniversary of ToG.
[Translator: Check out the picture of Baam-Khun-Rak made for the anniversary!]
Well if you count the two years I drew as an amateur, it is closer to the 7th…
Anyway, thanks to all of you who made this possible.
I honestly think I have so much to learn and improve on, and I still have a long way to go…
But I’ll try my best to give you a better comic.
Thank you.


Today was Hoaqin’s chapter.
He is a main-ish antagonist, so he needed that… Haha.
As you’ll see, he is different from enemies so far.
Quite a dominant person.
As for the ugly past of Daniel and Hoaquin, I’ll tell you one part at a time.


About settings,
(I believe) that in comics or novels with their own universe, settings need to be revealed.
But if those lead to unfounded theories, it will confuse many readers.
I do like posts that attempt to make predictions, but please try to focus on the main story being told.
Thanks for helping me.
[Translator's notes: SIU opened up some new setting posts.]