36F - Hell Train: Hoaqin (4): Wangnan and Yihwa wonder how to retrieve Hwa Ryun whilst Daniel and co stumble across a problem blocking their progress. Using Hwa Ryun to solve the maths puzzle, Daniel justified his actions as they went inside. Meanwhile, Team Tangsooyook encounter Ha Jinsung who checks in on his cute little pupil. After finding out about the situation Jinsung tells them not to go after the train as it was too dangerous.

On the train, Rachel's group proceeded into the room (before Wangnan and Yihwa could come in with them) and immediately encountered the train guardian, Bloomer. Despite the guardian's fearsome strength, the group easily defeated him with Hwa Ryun's co-ordination. With Hwa Ryun questioning Rachel's motives, Daniel opens up the door to free the first copy, Hoaqin! 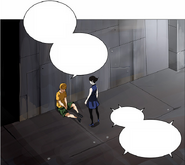 Wangnan's flat out of ideas... 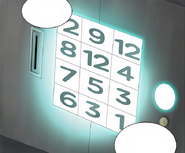 Can you work it out? Don't cheat!

Day & Night in the Train! 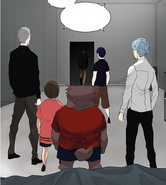 Don't let his face fool you, Koon is shitting bricks...

Here's the answers! Did you get it right? You cheated didn't you!

Simple. Just aim for the nuts.

Opening the doors to reveal...

...the man of the moment, HOAQIN!
Add a photo to this gallery

The new guy looks okay, but he is actually the craziest character in this comic so far…


This chapter was long because I’ve been preparing for it for several weeks, by working on it part by part.
Of course, this will leave me burnt out for a week at the very least…


Today’s puzzle was simple like that because it was the hardest I could come up with…
I’ll ask people who are smarter with math next time.


Thanks to everyone who are cheering me on in the Cafe and on Twitter.
I hope to answer you by making sure to release merchandise you can own as fast as possible, such as the figurines I mentioned before!

Retrieved from "https://towerofgod.fandom.com/wiki/Vol.2_Ch.156:_36F_-_Hell_Train:_Hoaqin_(4)?oldid=125628"
Community content is available under CC-BY-SA unless otherwise noted.