30F - Hell Train: Revolution Road - Epilogue: Bero Bero and her team seemingly dominate during the final match of the tournament whilst Rak watches, completely bored out of his mind. Chang and Quaetro tease Rak until Khun arrives with Akraptor and Beta. Rak asks what happened and Khun tells him that they missed the train and Baam was unconscious.

In Baam's room, Rak chastises Khun for failing but Beta defends him, saying that Baam's life was safe. Beta goes on to explain what had happened to Baam and why he would be okay, for now. He finishes by telling them ways Baam could gain full control of the Thorn but he had to go up the Tower to do so. Akraptor wonders what they should do now since the train had left and asks Khun for any suggestions, to which Khun says that they would have to stop the train from moving so that they could get on board.

Aka and Boro wonder why Daniel was working with FUG and both say trying to revive Roen in 'that' way was a bad idea. Boro then suspects that Daniel could be being misled by FUG, adding that Baam was the "Jyu Viole Grace". Aka wonders if FUG wanted someone to replace Jyu Viole Grace and an uncertain Boro replies that either way it would only be a matter of time before "that guy" was woken up. Meanwhile, on the train, Daniel and Rachel's group encounter the first of the train's guardians with Daniel preparing to take them down.

With his head aching, Baam finds himself in an unknown yet familiar place and hears someone calling him. A surprised Baam then sees a large red ball calling out to him and he asks who the red ball is. The red ball does not know what it is and simply calls itself a "power" or a demon. It then says to Baam that his desire to go up must be why he gained this power and then tells him to take the power to help him go higher.

Khun relays the news of the train leaving to the others when Aka and Boro arrive, with the former saying that soon everyone will realise the tournament and Ha Yura's concert were fake and the latter adding that soon Train City will be a total mess. Aka suggests that Khun and his team go and take the tests so that they could catch up to the train at the station on the 37th Floor. Khun inquires if they were helping due to Daniel but Boro tells him it was because Daniel is trying to revive the Slayer candidate that was sealed in the train a long time ago, "Hoaqin". Boro adds that if Hoaqin woke up all the D-rank Regulars would fall to hell and tells Khun to leave with his team once Baam woke up.

Later on, Khun chats with an unknown person via his Pocket and asks the person to stop the Hell Train for him. The person agrees, but tells Khun he would pay for it later. Elsewhere, Baam finally wakes up whilst Wangnan and Yihwa are freed from the White Heavenly Mirror's blade ready to journey through the Hell Train. 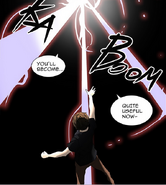 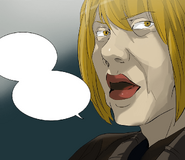 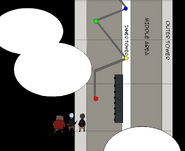 PK machine (?) appearance foreshadowing…
I will be back on June 8th after a week off.
Thank you. Have a happy week. ^^

The Train City Arc is over, and I’ll take a one-week break.
I originally got a 2-weeks break, but I changed it to one week.
This is mainly due to my wrist condition getting worse again.
Sorry.

To give you some hints about the next arc:

PS. Last week, I mentioned that there will be bad news and good news…
The bad news is the break.
The good news is that I have a short comic ready to upload.
[Unsure whether this is ToG or TUS related or not.]
An image of bam sleeping is included with this blog post

[Blogpost during hiatus between arcs]

The gist of the comic is that Baam is worried about his popularity having dropped compared to others.
This 4-koma is just for jokes.

About the blog-comic I said I prepared... I will update it later.
It is about mecha!
It’s not really ready yet though....

Now, about next week's chapter.
Yes, 'Hoaqin' is named after the soccer player you thought about.
There are no similarities, save for the fact that they are both very powerful.
You can expect this guy to be a bit... psycho.

And thanks to everyone who congratulated me for my B-day!