30F - Hell Train: Revolution Road (38): Because Rachel pushed him away, Twenty-Fifth Baam falls. Rachel tells him that this place is not for him to come up, which makes him enter in a confusion why he can't be with her.

Ha Yura, who has been waiting at the entrance of the train, is wondering if entering is really such a good idea (and that there is a "different space behind") when Team Rachel arrives at the top of the stairs. Daniel especially tells her they have to go now, to avoid being sent to different destinations and spreading them.

Koon A.A yells at Baam to get himself together as Ja Wangnan asks what happened to Viole.

While Baam falls he has a dream-like flashback of his past with Rachel in the cave. In that flashback, Rachel woke Baam up from a nightmare. Then told her they'd "go to the mountain in the west today and also the cliff where the 'three eyes are looking down on us'" which seems to have been an idea of Baam. He retorts saying that it isn't really a mountain but agrees to go. Rachel replies saying she had never seen such huge mountain before and "the world behind was much deeper than they thought".

The point of view moves to present day Baam in his fall, and he thinks about how much he would like to go "up high, to the place where she is". Koon A.A asks Wangnan if he had a Ticket and could trust him with his life. He also asks Beta to catch Baam who is still falling and seemingly unconscious. The rest of Team Tangsooyook reaches Koon and he asks Ran to come as close to the train as possible. Ran replies that if A.A can support him with his Lighthouse, then he can. A.A says it's a risky plan but wants to stop Rachel and Cassano by any means necessary while holding the White Heavenly Mirror.

Point of view goes back to Team Rachel and Cassano asks what they should do with Hwa Ryun with Angel telling him to keep her and she should do good as a hostage. An unidentified man resembling Traveller starts worrying about the Hell Train but Cassano tells him he can get inside as his Ticket is ready. The Koon brothers arrive and Cassano attacks them but his attack is blocked by A.A's Lighthouses. Koon throws the WHM (holding Wangnan and Yeon Yihwa inside it), with Ran enhancing its speed with his spear. The WHM cuts Rachel on the cheek as it flies by and crashes into the door of the train, presumably passing through it. A.A tells Rachel they will meet again "at the higher place".

Finally Beta, who had caught Baam in his fall, tries to wake him up, calling him several times, with the chapter ending on that point. 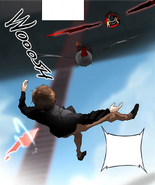 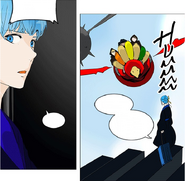 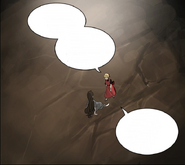 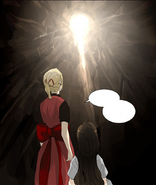 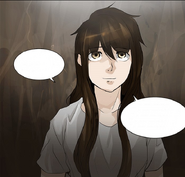 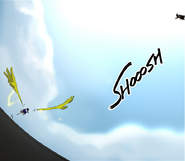 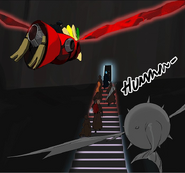 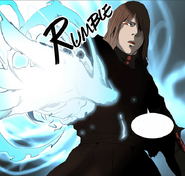 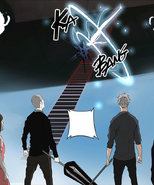 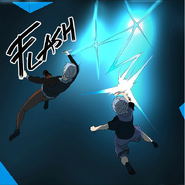 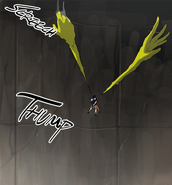 For some reason,
Koon pic often comes with blog post these days..


The Train have finally started moving.


Koon’s White Heavenly Mirror (knife he got in Gongbang Tournament) got into the Train.
Next chapter will explain a bit on why he threw that.


Wrist was in bad condition again, but I managed to survive.


Well then, see you all next week

Retrieved from "https://towerofgod.fandom.com/wiki/Vol.2_Ch.150:_30F_-_Hell_Train:_Revolution_Road_(38)?oldid=126782"
Community content is available under CC-BY-SA unless otherwise noted.