30F - Hell Train: Revolution Road (36): Baam approaches Rachel telling her that he will stop her himself if he has to. Koon shouts that he needs to calm down and stop using the Thorn's power but Baam says he needs to, to keep Rachel.

Baam then asks Rachel to come back with him and continues that he didn't understand her actions. However, out of nowhere, the Mad Dog rushes in and attacks Baam from behind but Baam flanks him and attempts to strike the guy from behind instead. The hooded man blocks Baam's punch with his foot and then commends Baam's power with a floored Daniel noting that Baam was a monster. Koon then tells Wangnan to catch Cassano while he takes care of Baam.

Baam continues to fiercely fight Rachel's ally and Koon briefly traps Rachel with his Lighthouses before Daniel frees her with an attack. Poro Poe then arrives with the navigator, telling Daniel to get on before Yura went in without them. Rachel's ally is further impressed by Baam's power as the latter begins to overwhelm him. As Baam is fighting he hears a voice talking to him, just before he forcefully repels Rachel's ally with a powerful palm thrust. As Daniel tells Rachel to hurry up, she worriedly looks back at Baam with her hand clenched... 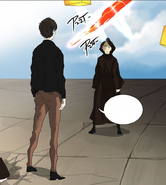 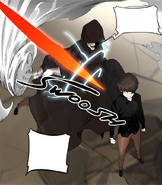 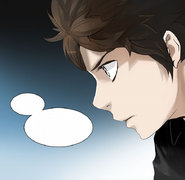 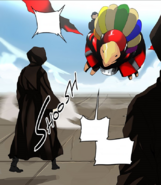 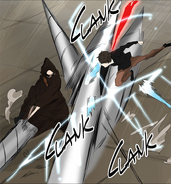 
TL note: There is a pic of Koon SIU uploaded at the blog.
And yes that really is all he wrote on this post.

Retrieved from "https://towerofgod.fandom.com/wiki/Vol.2_Ch.148:_30F_-_Hell_Train:_Revolution_Road_(36)?oldid=125636"
Community content is available under CC-BY-SA unless otherwise noted.