30F - Hell Train: Revolution Road (35): The door to the Hell Train opens for Yura's, Baam's power begins ascending as a result of the Thorn, gaining everyone's attention, and Daniel tells Poe to activate the navigator so they could escape.

Meanwhile, Cassano's inability to control his new power is revealed, giving Wangnan and Yihwa the hope to win, but they then feel the emanations of Viole's power, which worries them. Beta then appears (with Ran and Boro in tow) and notices the Thorn going out of control. Koon attempts to calm Baam down, but the latter is consumed by his confusion from Rachel's actions. Daniel then tells his allies to hurry and get on the Train, shifting Angel and the Mad Dog into action with the latter repelling Wangnan and the former repelling Yihwa with her metalfish.

Daniel tells Rachel they needed to go, and the two flee but not before Baam rushes over and strikes Daniel from behind with a devastating shinsoo-enhanced punch, shocking everyone present. Baam then looks at Rachel and tells her she wasn't going anywhere. 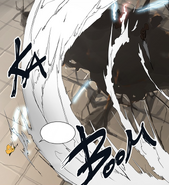 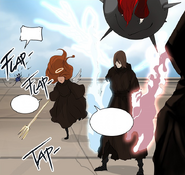 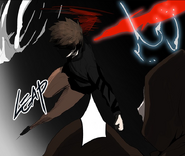 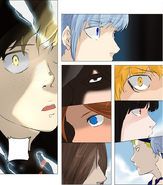 At last, Baam has crossed the line.
Next chapter, be prepared for him to be in angry mode.


And about other characters like Wangnan, they will get their time to shine later.
This Hell Train is going to be hellish long.
So everyone will have to wait until it is their turn to lead the story.


For now, it is about Baam and Rachel.
And getting on the Hell train.


Wikia Staff notes: this yellow awareness ribbon is to commemorate the Sinking of MV Sewol.

Retrieved from "https://towerofgod.fandom.com/wiki/Vol.2_Ch.147:_30F_-_Hell_Train:_Revolution_Road_(35)?oldid=126779"
Community content is available under CC-BY-SA unless otherwise noted.