30F - Hell Train: Revolution Road (34): Baam struggles to comprehend what Rachel is saying to him whilst Khun looks on in anguish. Meanwhile Cassano ignites his right arm and attacks Wangnan and Yihwa with a devastating blast, with Wangnan noting how fearsome the attack was. After Cassano launches his attack, Traveller exclaims that he cannot control the power yet as it was unstable, shocking Wangnan.

Down below Boro notes that it is too high to get up and Aka wonders how Daniel managed to gain such power. Beta then steps up, with Dionysus ignited, and says that he is going to fly up to meet Cassano.
Poro Poe is alarmed by Daniel's request to ride the navigator but Daniel manages to persuade him after saying that staying any longer would be disadvantageous due to Viole.

Baam once again bares his heart out to Rachel but she drops the bombshell by telling him that her goals are much more important to her than he is. Baam is shocked by the claim and the anger that follows results in his Thorn becoming volatile. Elsewhere Ha Yura finally reaches the entrance to the Hell Express and, after inserting her Express Ticket, the door begins to open welcoming her to the Hell Express. 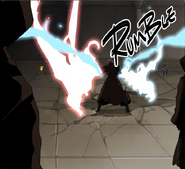 Cassano's devil in his both arm.

Cassano's devil in his both arm. 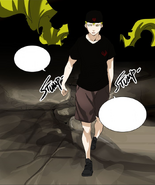 Beta ready to take off. 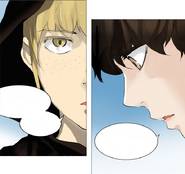 Entrance to the "Hell"

I can't admit it

It feels like I have not written a blog post for a long time, even though it really isn’t true.

This chapter, well, you’ll have to see it yourself.
Instead of reading explanations.

Rachel sure is important to Baam.
She is the reason he changes.

My wrist feels a bit off again, but hopefully I won’t have to cut down length of chapters..

Goodbye, and please wait for the next chapter~