30F - Hell Train: Revolution Road (33): Baam sees a surprised Rachel for the first time in almost a decade with an expectant look on his face. While the Regulars down below wonder how they'll get up, everyone finally notices Viole's presence and Daniel takes note of the situations going on.

Baam sheepishly tries to figure out what to say to Rachel after all this time and, when he attempts to start the conversation, Rachel interrupts him with two armour-piercing questions that shock him. Meanwhile, Cassano endures Wangnan and Yihwa's combined attack with minimal damage and Wangnan explains it was because Sophia toned down the Antimatter Bomb. Cassano rebukes Sophia's ideals but Wangnan merely states he came in order to wake up Horyang. Cassano muses he should eventually wake Horyang up but adds that he does not deserve such power if he can't come to the meaning of it.

Baam struggles to answer Rachel's questions whilst Poro Poe questions Daniel on what all the mess with Viole was about. Daniel shushes Poe, telling him it was a key moment, and more importantly asks Poe whether he could move the navigator so that they could escape quickly, since mayhem would soon break out. 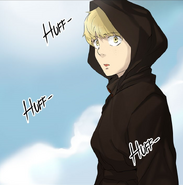 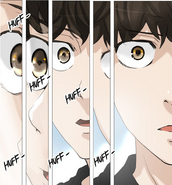 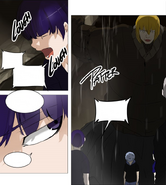 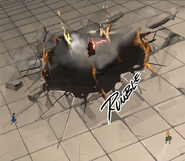 [SIU talking about a little ad he put under chapters in Korean version.]

The pacing has gotten rather slow.
It will be the same for the next chapter.
For now, I will be greedy and use up precious chapters to set up the mood.

And people have been talking about wanting to see Baam breaking down mentally…
…Well, it does not seem so far away now.

Koon looks like he is in a love triangle.
The problem is, Baam seems to be in the middle.
He may look like a perfect guy, but he too has some faults.

Have a nice week, and enjoy the pretty flowers outside~

Retrieved from "https://towerofgod.fandom.com/wiki/Vol.2_Ch.145:_30F_-_Hell_Train:_Revolution_Road_(33)?oldid=126777"
Community content is available under CC-BY-SA unless otherwise noted.