30F - Hell Train: Revolution Road (29): Hon Akraptor, Prince and Yeo Miseng make their arrival whilst Beta begins to struggle against Mirotic. After being informed of Mirotic's semi-illusory nature, the gatekeeper prepares to attack again but is intercepted by a blast of shinsoo from Akraptor. Beta finally notices their presence as Prince announces that Team Tangsooyook had come to help.

Beta rejects their help, whilst Aka and Moontari wonder who they are, but Prince and Miseng affirm that they had developed their abilities in the past year. Miseng then uses her Observer to discern Mirotic's weakness and then tells Akraptor to strike it with his shinsoo blasts. Beta wonders where the hell Akraptor is aiming until he realises Mirotic's form flickering. Prince follows up with a powerful needle-based lunge and Beta then realises what Mirotic's weakness is. Knowing what to aim for, Beta and Prince aim to finish Mirotic off, with Aka and Moontari supporting them from behind, however Ran exclaims that he will be the one to finish it before launching a lightning spear at the gatekeeper, resulting in a large electrical explosion.

With the guardian of the gate dissipated, Ran acknowledges Team Tangsooyook's presence and Akraptor informs Aka of their goals. Ran asks where A.A. is and Akraptor replies that he took another path there before asking whether Cassano was really with FUG. Ran confirms it and says they need to get going in order to catch him. 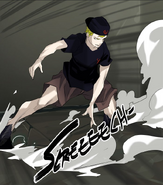 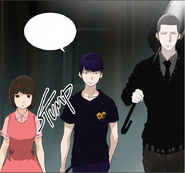 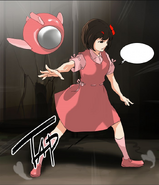 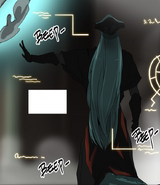 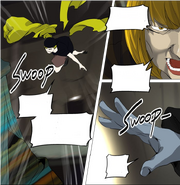 So…
This week was the forgotten characters showing themselves off,
and next week will be like this too.

Miseng’s skills are, as some may have noticed, an improved version of the Gongbang Tournament.
As you saw in this chapter, an Observer’s role is very important.
The Tower isn’t a place where you can survive by pure strength.
Well, there are some overpowered guys who are on their own level,
but then they have to use their position wisely when they fight with each other.

The Mirotic Guardian is… like making copies with Shinsoo.
It’s not really strong, but the mechanism kept reviving it over and over.
And defeating him won’t start the Train anyways…
I had to make some last minute adjustments for the team to win against the Guardian though.
If they weren’t lucky, it would have been a much harder fight.

Aka may look somewhat underpowered,
but in a personal 1 vs 1 fight, Aka is stronger than Beta or Ran.
At least, in theory.

The story may be confusing, but I plan to slow down and make it clearer.

See you all next week~

Retrieved from "https://towerofgod.fandom.com/wiki/Vol.2_Ch.141:_30F_-_Hell_Train:_Revolution_Road_(29)?oldid=125643"
Community content is available under CC-BY-SA unless otherwise noted.