30F - Hell Train: Revolution Road (28): Baam decides to take the Thorn out, with Daniel realising what it is. Daniel tells Baam that he can't use it properly yet, Baam replies he doesn't need to control it properly to bail himself out of this situation. Baam has a flashback of Hwa Ryun telling him not to exceed a ten minutes time limit for now in order to prevent the thorn from taking over his body and mind. Boro arrives and recognises Daniel.

Meanwhile Team Aka is still fighting Mirotic, the "real one" apparently appearing before them. While Aka decides to save Koon Ran from Mirotic and get away from it, the door behind opens and Beta appears, wondering what is going on.

Back to Baam again, Boro calls out to Daniel who he thought had died. Daniel wonders if Aka is here too, himself. Boro says that Daniel definitely died on the train. Daniel then explains "I came back from hell. To go back to hell, Boro. To see her..." and adds, "You stay there and watch helplessly. Just like when Roen died". He then gets a text to his Pocket telling him to go back because the train is departing.

He escapes by climbing up the stairs and Baam and Boro follow him. Baam asks Boro what is going on and who is Daniel. Boro replies that he was once his comrade but that he wasn't supposed to be there because, two hundred years ago, he died on the train. Baam not understanding asks Boro how he could be there if he truly died but Boro says that he doesn't understand himself. Angel also got the text to her phone via Emile. She decides to finish Hwa Ryun off but Daniel tells her to retreat and take Hwa hostage and go up. Angel sees Baam and Boro chasing after Daniel, seemingly disappointed. Above Rachel tells Ha Yura who has just arrived to move on.

Finally, the point of view goes back to Team Aka again, and Beta decides to attack Mirotic and manages to do actual damage, saving Ran altogether. Ran says that he will be up before two minutes but Beta states the fight will be over even before that. The door behind opens and Akraptor, Miseng and Prince appear... 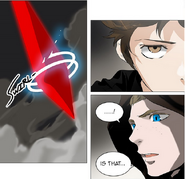 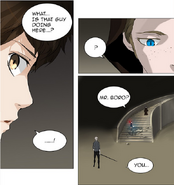 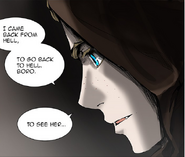 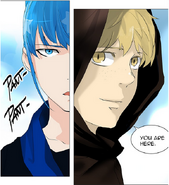 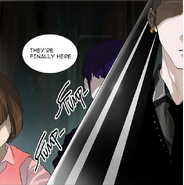 How much is it?

This morning, there were some problems with Naver’s system.
I guess they are humans who make mistakes too.
Sorry for all the confusion.
I am lucky to have so many readers reading my comic,
but it seems to come with more responsibility.
As always, thanks to everyone.

This week, many old faces showed up.
Though you’ll have to wait a little more for the people you want to see.
I was happy to draw them too, after not seeing them for some time.

Daniel and Boro’s relationship is a rather strange mix of friendship and camaraderie.
I can’t find better words to describe this…
Boro may not look like much, but his battle skills are not to be ignored.
He didn’t survive the Train for nothing.
Of course, he has his own story too.
Daniel… He is a strong Regular.

Next: old faces will be delivering some punches.
Though they are somewhat less popular, please love them too.

Be careful to not catch a cold, and see you next week!

Retrieved from "https://towerofgod.fandom.com/wiki/Vol.2_Ch.140:_30F_-_Hell_Train:_Revolution_Road_(28)?oldid=151529"
Community content is available under CC-BY-SA unless otherwise noted.