30F - Hell Train: Revolution Road (27): As Rachel looks upon the Hell Train's true form, Boro tells Hong Danhwa that on the Hell Train one will only lose everything as the train only runs through "the endless hell".

Daniel gives Baam his reasons for his actions in helping Ha Yura and Rachel before preparing an attack. Meanwhile Angel engages Hwa Ryun allowing Ha Yura to escape up the stairs, prompting Hwa Ryun to ask why they leaked the information. Angel replies that to complete their plans, they had to follow Rachel's group before summoning her "metalfish" and setting them off to attack. As Hwa Ryun defends, she wonders why all the paths kept getting distorted and Angel, as if on cue, informs her that Emile was the reason for her inability to read paths properly. Angel's metalfish then sprout spikes and lethally attack Hwa Ryun as Angel noting that if Hwa Ryun dies, her allies would do whatever it took to come after them.

As Daniel's attack swells rapidly Baam generates five baangs and blasts them in an attempt to stop Daniel. However Daniel skilfully evades all of Baam's attacks and strikes him with a huge blast of energy. Daniel then highlights the features of his special Shinsu control ability and then details what was soon to occur before ending that there was no way for Baam to stop any of it. With his back pressed firmly against the wall, Baam resorts to summoning the one thing he didn't want to use... 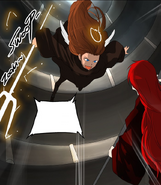 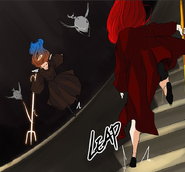 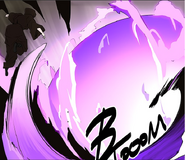 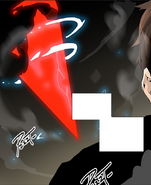 Did you have a good New Year's Day~?
(TN: First Day after Lunar New Year)

I had to work even though it was holidays…
I hope fellow authors didn’t have to work so much.

The Thorn has finally appeared.
The reason it was hidden will be revealed next week.
This week, it was revealed that Emile was interfering with Hwa Ryun’s abilities as a guide,
but this isn’t the extent of Emile’s abilities.

The reason why Rachel’s team and Ha Yura are trying to ride the
train is being kept a secret,
but they will be focused on later.

I can say that their individual objectives are different, though.
What ‘Angel’ meant by “you have to follow” will be revealed later too.

Angel’s Shinheuh are very hard and strong.
Also they are special in that they do not require a ‘fish bowl’.
Daniel is kind of a soul hunter.
The stronger souls he collects, the stronger powers he can use.
He also has great deal of control over the skill.

See you next week then~.